I'm the first to admit coconut isn't my favorite flavor or food. Same goes for Almond Joy candy bars. The coconut+almond+chocolate combo is a niche favorite that I just don't happen to love. Instead, I'm on Team Chocolate+Nougat+Peanut Butter. That's just how I roll (and eat).
That said, I'll be the first to admit that if you are on Team Coconut+Almonds+Chocolate, this is the cupcake for you! It's got a coconut cupcake base topped with homemade chocolate glaze, shredded coconut and toasted almonds. Sounds like a winner to me! 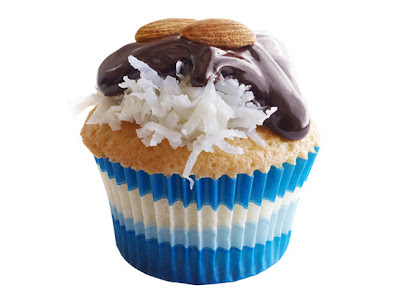 Photo courtesy of FoodNetwork.com
For the Cupcakes:
2 large eggs plus 4 egg whites, at room temperature
1 cup cream of coconut
1 teaspoon coconut extract
1 teaspoon vanilla extract
2 1/4 cups cake flour, sifted
1 cup granulated sugar
2 teaspoons baking powder
1/2 teaspoon salt
12 tablespoons unsalted butter, cut into pieces, at room temperature
For the Topping:
2 cups whole milk
1 14-ounce package shredded coconut
1 tablespoon confectioners' sugar
1/2 teaspoon vanilla extract
Pinch of salt
For the Glaze and Garnish:
6 ounces bittersweet chocolate, finely chopped
3 tablespoons light corn syrup
1 tablespoon unsalted butter
48 roasted almonds, for garnish
Make the cupcakes: Position a rack in the middle of the oven and preheat to 325 degrees F. Line two 12-cup muffin pans with paper liners. Whisk the whole eggs and egg whites in a large bowl. Whisk in the cream of coconut and the coconut and vanilla extracts until smooth.
Whisk the flour, sugar, baking powder and salt in a large bowl. Beat in the butter, one piece at a time, with a mixer on low speed until the mixture resembles coarse meal, 3 to 4 minutes. Add half of the egg mixture, increase the speed to medium-high and beat until fluffy, about 1 minute. Beat in the remaining egg mixture until combined, scraping down the bowl as needed.
Divide the batter among the prepared cups, filling each about halfway. Bake until a toothpick inserted into a cupcake comes out clean, 18 to 22 minutes. Let cool in the pans 10 minutes; transfer to racks to cool completely.
Make the topping: Combine the milk, coconut, confectioners' sugar, vanilla and salt in a medium saucepan. Bring to a simmer over medium-high heat and cook until the milk is absorbed and the mixture thickens, stirring occasionally, about 15 minutes. Cool completely.
Make the glaze: Put the chocolate, corn syrup, butter and 3 tablespoons hot water in a microwave-safe bowl, cover with plastic wrap and microwave on 50 percent power until the chocolate melts, about 2 minutes. Whisk to combine. Keep warm.
Top each cupcake with a heaping tablespoonful of the coconut mixture, pressing gently until compact. Spoon 1 teaspoon glaze on top and garnish with 2 almonds. Refrigerate until the glaze sets, about 20 minutes.
Crumbs left by Christie Bishop at 10:51 AM