I've never really understood the big deal about Snickerdoodles. Everyone seems to love them. I mean, when you think about it, Snickerdoodles are just sugar cookies coated with cinnamon+sugar. But then I had a flashback to when I was young, coming home after school and making cinnamon sugar toast. There was something amazing about the warm, buttery crunch of the cinnamon sugar on the toasted bread, so much so that I actually made my own blend of cinnamon sugar and kept it in a special container. I was about eight years old at the time, so I guess you could say that my culinary experiments started at a really young age. The cinnamon toast memory made me think that I should give Snickerdoodles another shot, so I did. And they turned out great. I guess I'm on the Snickerdoodle bandwagon now.

Here's what you need to make the Snickerdoodles:

In a large bowl, whisk together the flour, salt, and baking powder. In a separate bowl, beat the butter and sugar until smooth, light and fluffy (about two to three minutes). Add the eggs, one at a time, beating well until combined. Scrape down the sides of the bowl and mix in the vanilla extract. Add the flour mixture (in batches works best, so the flour doesn't get all over you and your kitchen) and beat until you have a smooth dough. If the dough is too soft, cover and refrigerate until firm enough to roll into balls (one to two hours).

Preheat oven to 400 degrees and make sure the rack is in the middle of the oven. Line two baking sheets with parchment paper or Silpat. Shape the dough into 1-inch round balls.

To make the cinnamon-sugar coating, mix together the sugar and cinnamon in a shallow bowl. Roll the balls of dough in the cinnamon sugar and place on the baking sheet, spacing about two inches apart. Then, using the bottom of a glass, gently flatten each cookie to about 1/2 inch thick. 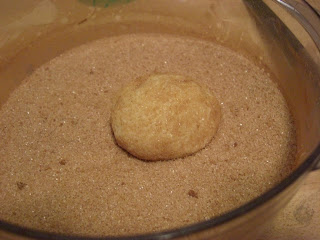 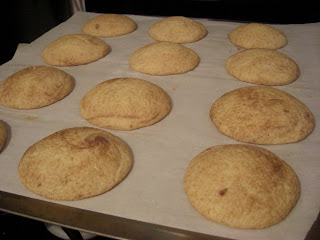 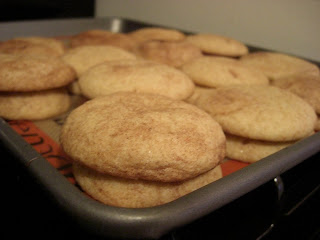 Bake the cookies for about 8 to 10 minutes or until light golden brown around the edges. Remove from the oven and place on a cooling rack. Not ready to eat them right away? I'll refrain from calling you crazy, but you can store in an airtight container, at room temperature, for about 10 - 14 days. But if you're like the rest of us and can't resist the warm, buttery crunch of cinnamon sugar cookies, eat your heart out!

Crumbs left by Christie Bishop at 11:24 AM