I've been on a baking bender lately, all for Christmas gifts for friends and family. I've been trying a ton of new recipes that I've never had the time (or energy) to make before, several of which involve the tedious task of making sugar-based desserts, e.g. caramels, brittles, etc..

I feel like I've gotten a really good hang of making the "turtle" portion of Turtle Brownies. I've gotten the entire process of homemade brownies + turtle topping + chocolate ganache drizzle down to almost exactly two hours. So instead of making brownies over and over again, I moved onto a new sugar challenge: peanut brittle.

I found a cool recipe for cinnamon nut brittle and tried it tonight. The recipe calls for the sugar mixture to come to exactly 340 degrees, watching the temperature closely on a candy thermometer. Well, slight problem because I don't own a candy thermometer. Possible solution: the recipe describes the mixture as "deep golden brown" when at 340 degrees, so I just eye-balled it. It turned out pretty well, I've got to say, but I'll let my friends who are going to be gifted with the brittle be the last word.

Here's what you need to make the cinnamon nut brittle:


Combine the water, sugar, cream of tartar and corn syrup in a medium-size heavy saucepan fitted with a candy thermometer. Bring to a boil over medium heat. After it boils, stir the mixture occasionally. 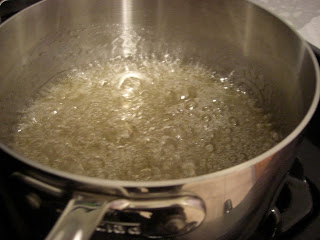 Boil the mixture until it reaches 340 degrees. The color should be deep golden brown (do not go by the color of the above photo; that was taken right after it started boiling). Remove from the heat and, working quickly, stir in the cinnamon with a wooden spoon. Stir in the butter until melted, then the peanuts and baking soda.

Pour the mixture onto the oiled cookie sheet with sides and spread it out a bit with the back of a wooden spoon, to about 1/4-inch thickness (it may not fill the whole pan). Let harden, uncovered, in a cool place, 30 to 45 minutes. (To wash the saucepan, soak it overnight with really hot water.) 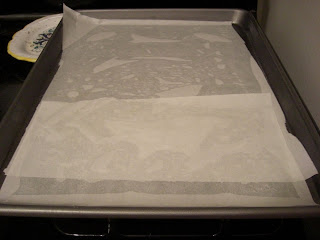 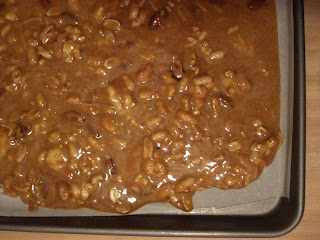 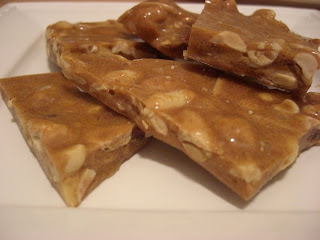 Using your hands, and wearing cotton or plastic gloves if desired to keep off any fingerprints, break the brittle into pieces. Store in an airtight container, that is, if it lasts that long!