The Best Gift Of All

The dessert gods were looking down on me last week. Never heard of the dessert gods? You're missing out. I often find myself praying to them when I'm piping an intricate icing design, hoping my brownies come out of the oven moist, or just throwing together a new cookie or dessert recipe.
"Please, dessert gods, let this [insert recipe here] turn out well!"
Blasphemous? Sure. Does it make me feel better? You betcha.
So two weeks ago when Bryan and I were in San Francisco, we came across a Papyrus right next door to the Palace Hotel. If that's not a sign, I don't know what is. Perhaps the "SALE! 70% off all holiday items!" sign made it more obvious. We went in and were checking out their wares when, lo and behold, Bryan came across these fantastic plastic chinese food containers. 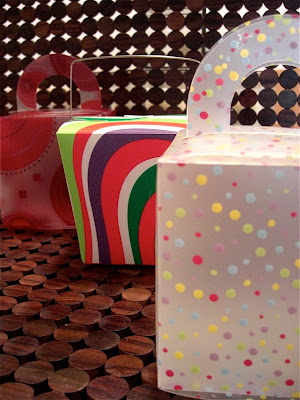 I think chinese food containers are great for edible gifts of all kinds, especially leftovers. But the ones I typically use are of the "cardboard" variety. They're fine and good enough, but risk leaking. These new lovelies, on the other hand, were made from a very flexible synthetic/plastic material. Even more important was the fact that the designs were seriously adorable. But the best part of the day – the part I'll remember most – is when Bryan exclaimed "They're 70% off!" Hearing his enthusiasm, the salesperson chimed in, "Yep, they're 70% off. Each box is only $1.60."
Then Bryan said something I'll never forget: "LET'S GET ALL OF THEM!"
It's not that Bryan doesn't love all my baking and cooking exploits; shoot, he's my official "taste tester." It's just that since neither of us are working right now, we're really careful about what we spend our money on. Let's just say that cooking containers aren't exactly Priority #1 on the spending list. So when Bryan starting scooping up all the boxes, and I mean ALL the boxes (there were about 30 total), I couldn't believe my eyes. But given that the man knows a great deal when he sees one, I didn't say a word. I just started bringing boxes to the front counter.
Thirty boxes and barely $45 later, I have the privilege of using my first one! I made turtle brownies last night for my good friends Kacie and Reggie, and the box is a perfect carrier. Not to mention we're headed to a birthday party later tonight, so I filled another box for our friend John. 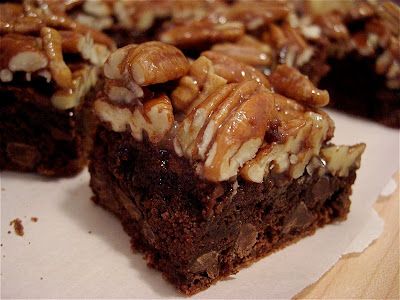 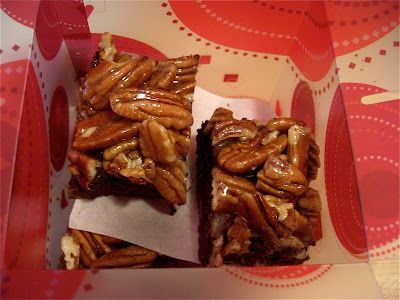 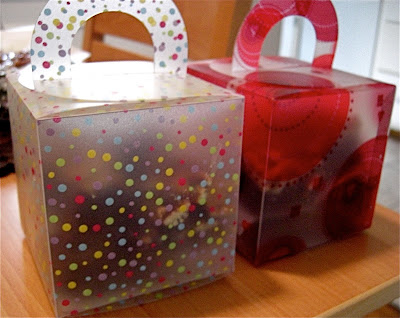 I'm not sure if Papyrus has any more of these goodies, but if you've got one in the neighborhood, check it out. I love that store for many more reasons than just these boxes. They're fantastic! You can check out the boxes and the brownies below. If you want the brownies recipe, I posted it here in November.
Crumbs left by Christie Bishop at 12:47 PM