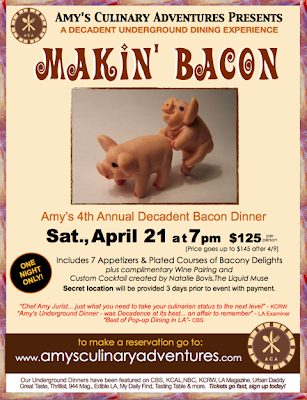 Got plans on Saturday, April 21st? Cancel them. I've got three words for you: UNDERGROUND BACON DINNER. Chef Amy Jurist, founder of Amy's Culinary's Adventures and Kitchit private chef, is dedicating the latest in her underground dinner series to Makin' Bacon. Don't let the tiny humping pigs on the flyer below distract you, because Amy means serious bacon business.

The dinner is normally $145/person, but lucky Pardon My Crumbs readers get $40 off the rack rate (enter Pardon My Crumbs at check-out). Just make sure to bring a hefty appetite. Guests will indulge in three decadent appetizers and four plated courses of bacony delights, all with wine pairings and a secret specialty cocktail created by Natalie Bovis, The Liquid Muse (I can only assume bacon will have something to do with it). The event's ever-changing location -- which is kept a secret until three days before -- has ranged from art galleries, auto garages, penthouses, Hollywood homes, and photo studios. Amy's actual menu is also a secret until you get to the event, which only heightens the bacon suspense.

Makin' Bacon marks Amy's 4th annual Decadent Bacon Dinner, but the top chef has been running her Decadent Underground Dinner Club in LA for over six years, saying "I love creating these one night-only experiences where the food, the people, [and] the location will never be together again." In past dinners Amy says she has "taken my dinner guests on culinary tours to Italy, France, Asia, Morocco, Greece & California. I've plied them with cheese, mushrooms, chocolate and bacon."

Amy's Underground Dinners have been featured on CBS, KCAL, NBC, KCRW, LA Magazine, Thrillist, Tasting Table and more. Media aside, I can vouch for Amy firsthand after attending a dinner she cooked for a friend's birthday. Her style is inventive, bold and flavorful; I can only begin to imagine what delights await guests on April 21st!