I've been in a motel in La Jolla all week so there's not been much cooking going on. Until I get back to that, I thought I'd share a fun article about a restaurant I've been dying to try: The Lazy Ox Canteen. Until a recent explosion of press, the restaurant has flown relatively under the radar. That could all change today, as S. Irene Virbila, revered L.A. Times food critic, gave the restaurant a glowing 3-star review. Until I'm actually able to get there myself, I have to live vicariously through the written review and mouth-watering photos. My favorite part? An employee from Temecula-based Sage Mountain Farm delivers produce and stays on to work a shift. As do employees from Fullerton's Bootlegger's Brewery. Now if that doesn't say a lot about the passion and positive vibe at a restaurant, I don't know what does.
Without further adieu, here's the story:
The Review: Lazy Ox Canteen in downtown L.A.
By S. Irene Virbila
Something is going on at the new Lazy Ox Canteen. With no sign out front (yet) and a quiet presence at the edge of Little Tokyo, this cozy tavern is, so far, flying under the radar. But locals -- the brave denizens of downtown -- are making it a headquarters of sorts, stopping in for a glass of craft brew and maybe some fried anchovies or red wine-braised beef neck. Some are on the lookout for chef Josef Centeno's baco, his signature flatbread with eclectic toppings. Or the stupendous burger on a house-baked bun.
Lazy Ox Canteen is poised to become the restaurant of the moment. Partners Michael Cardenas and Centeno have made all the right moves. The place has an edgy energy, a cozy, casual interior with huge bare filament bulbs swaying from the ceiling and wood-clad walls, a seriously great wait staff and a wildly interesting crowd. Not to mention Centeno's deliriously inventive cooking, all at affordable prices. 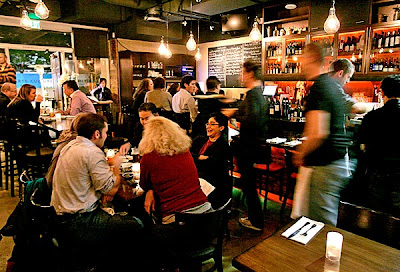 Photo Courtesy of Ricardo DeAratanha / Los Angeles Times
I'm torn. I'd like to keep the place an insider's secret. I like being able to decide, that night, to head over to San Pedro Street for dinner and being able to get in. That's about to change. In the future, reservations are probably going to need to be made well in advance, I'm sorry to say.
And to the Lazy Ox regulars who have found this newcomer such a welcoming haven, I apologize. But I have a job to do.
One reason the place works so well is that the two partners are such a good fit.
Cardenas, a founder of Sushi Roku and Boa Steakhouse, is in constant motion. Wearing jeans and tattoos, his hair longish, Cardenas greets guests and offers advice on the menu, sometimes ferrying dishes himself, and when the occasion demands, clearing tables. With this very personal project, he's made his way out of the corporate office and back to the action.
If Cardenas is a whirlwind of motion, Centeno is the calm at the center of the modest open kitchen. You hardly ever see him move, yet, by some sleight of hand, he and his small crew turn out an astonishing number of dishes. That includes the regular menu, which changes frequently, plus a blackboard of specials two columns wide. He's comfortable cooking in many cuisines, and his menu moves from Mexico to North Africa, the Middle East, France, Italy, Japan and the States.
Gutsy Cooking
Centeno's cooking is so irresistible and gutsy, I haven't encountered a dish I haven't liked and mostly loved -- yet. After stints at Meson G, Opus, Lot 1 and Aubergine in Newport Beach, Centeno is reenergized and is finally hitting his stride. Between gigs, he seems to have taken a fresh look at what he's doing and has focused on real food, without the gimmicks.
This may not seem like such a big thing, but it is. His food is alive and vibrant -- and there are at least 20 things you'll want to order. But also for the first time, he's got terrific front-of-the-house support. All he has to do is cook -- and put in some very long hours. 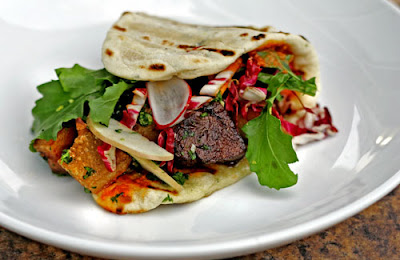 Photo Courtesy of Ricardo DeAratanha / Los Angeles Times
How's that working out? Pretty well, actually.
This is one small-plates restaurant where you won't be bored after a couple of visits. Centeno constantly pulls new tricks out of the bag. He pickles. He bakes. He cures. And God knows what else. That's why I head straight to the blackboard to see what's new.
The fish market is close by, so he might have fried sardines or anchovies. I crave those anchovies fried in a light, puffy batter and drizzled with a filigree of honey water so they're briny and sweet at the same time. His delicate quick-fry of baby pompano beats out most of the far more elaborate fish dishes I've tasted in my restaurant rounds recently. It's practically vibrating with fresh, pure flavor.
All parts of the pig show up too. One time it is crispy pigs' ears cut thick like steak fries, an essay on various stages of crisp, served with some pungent aioli for dipping. A flatbread might be crowned with braised pork belly and greens. And a killer pasilla soup comes garnished with crema mexicana, sliced red grapes and pork belly chicharrones.
Centeno doesn't do light. So when he's into veal, it's a braised breast, a delicious cut hardly ever seen on local menus, paired with a lovely creamy potato salad. 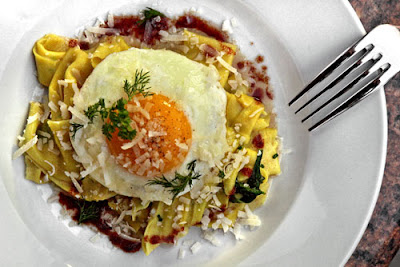 Photo Courtesy of Ricardo DeAratanha / Los Angeles Times
A few items seem to have a permanent residence on the specials board, like the Ox burger, which, to my mind, is now the best burger in town. Made from a mix of sirloin, filet tips and enough fat to hold it all together and keep it moist, the patty is thick and suffused with a deep beefy flavor. The bun is house-baked, not too soft, and the fries and the pico de gallo aioli that come with it are exceptional. He even makes his own stone-ground mustard.
From the regular menu, one of the simplest dishes is the most satisfying: whipped Jersey cow ricotta to slather on toast. Brick-roasted mussels in house-made sriracha (Thai chile sauce) with French feta crumbled over the top is a great dish to share. And the combination of pot roast served on Cream of Wheat with puckery kumquats is terrific. So is the buttermilk-fried quail with quince mostarda. Don't even ask: It is, of course, house-made.
I wouldn't call the small plates so small. You'll probably want to share most of them. But for those who simply want dinner on one plate, check out the family-style specials for two, one for each day of the week. Tuesdays, I might mention, it's roast leg of lamb with rosemary and garlic.
Hard-Working Staff
Staff members all know their stuff, can talk to anybody and can be trusted to tell you what's good that night. One works for Sage Mountain Farm outside Temecula, delivers the veggies and then stays on for a shift; another works for Bootlegger's Brewery in Fullerton. They're all working crazy hard, but you can sense a real joy in the effort.
The canteen has a great little wine and beer list. Wines wander the world, alighting in California only a few times, preferring byways like Sicily, Campania, La Mancha and Chile. There are a dozen beers on draft, including Allagash White from Maine, La Chouffe ale from Belgium, and Palomino Pale Ale from Bootlegger's Brewery in Fullerton. 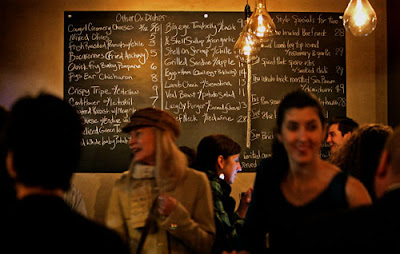 Photo Courtesy of Ricardo DeAratanha / Los Angeles Times
Alert: Reserve an order of chilled rice pudding the minute you see it on the board. It's dreamy, with sides of whipped cream and a deep caramel sauce, and definitely big enough to share. Another worthy sweet is Gala apples roasted in the brick oven in a cast iron skillet and served simply with crème fraîche and peppered caramel.
I should have expected it, I know, but at Lazy Ox the quality extends all the way to coffee from San Francisco's Four Barrel Coffee and teas from LA Mill.
Lazy Ox Cantina could be the poster child for the new wave of L.A. restaurants: gutsy, affordable, fun.
Crumbs left by Christie Bishop at 5:02 PM