Pop quiz: If I told you I had plans to open a fine dining restaurant on La Cienega's famous restaurant row, what would you say? I'm guessing you'd probably tell me over 90% of new restaurants shut down within their first year, so don't waste my money. What if I then told you my restaurant would NOT be open for dinner service on Friday nights? You would probably look at me in stunned silence. But wait, there's more. What if I THEN told you my restaurant would be in the seemingly doomed location that once housed The Lodge steakhouse and most recently, sushi joint Hakobe (RIP)? Perhaps you'd just walk away, shaking your head... 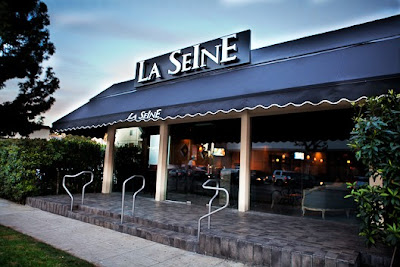 Photo credit: Eater LA
Well, here's the deal. A new restaurant -- La Seine -- did just open in the aforementioned, seemingly doomed location on La Cienega, just north of Wilshire Blvd. And I just happen to be a neighbor who has lived a stone's throw away for more than half a decade. I've jogged, driven, walked my dog and strolled with my husband past the glass-fronted restaurant space at least 100 times, and my heartstrings have tugged again and again as I've watched restaurants open -- all shiny, happy and new -- and sit empty for months, eventually giving in to whatever ails them: a failing business model, poor revenue stream, overpriced menu, lack of PR, or prohibitively expensive "restaurant row" rent.
La Seine's Bar 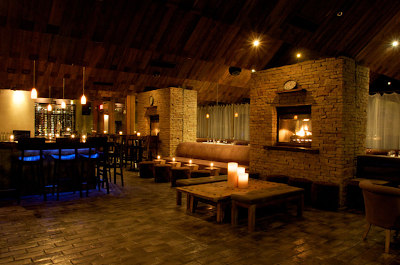 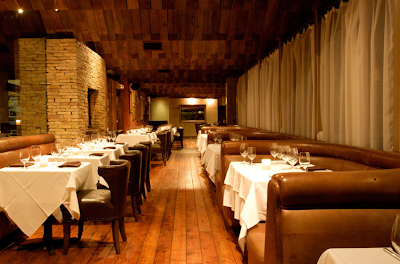 Photo Credit: La Seine
Which is why I have to say I'm THRILLED -- no, really -- to tell you about La Seine. It's an absolutely brilliant, and I mean brilliant, concept, especially for my South Wilshire neighborhood. Why? To put it bluntly, anyone who's familiar with the Beverly Hills-adjacent area knows its majority population is comprised of Orthodox Jewish families. I can safely say that as a non-practicing Presbyterian couple from San Carlos and Westwood (respectively), Bryan and I are easily the minority residents on our block, if not a 2-mile radius. But we've made it a point to adapt and make sure to respect their practices. For example, we drive much more carefully through our neighborhood between sundown on Fridays and nightfall on Saturday, when the devout are observing Shabbat and prohibited from using automobiles. It's all about respecting your neighbors and knowing them well enough to adjust accordingly.
Alex Reznik: La Seine's Executive Chef & Top Chef Alum 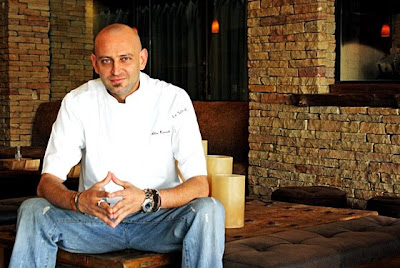 Photo Credit: Grub Street LA
Which takes me back to La Seine. Opened by restauranteur Laurent Masliah (A Cow Jumped Over The Moon), La Seine is a high-end fusion of French meets Sushi meets Kehillah-certified Kosher cuisine. It doesn't get more niche than that, but it also meets a local resident requirement that no one else is meeting: Kosher fine dining. And when I say "Kosher," I want you to get visions of Gefilte fish and Manischewitz out of your head; because as strange as the combination might sound, La Seine's Executive Chef Alex Reznik is turning out spectacular meals... that just happen to be 100% Kosher. And for a foodie who doesn't know much about Kosher restrictions other than they're incredibly strict, the superb quality, complex flavors and artful presentation of the Top Chef alum's menu honestly blows my mind.
Cocktails (from left to right) | Deauville, Whitsett, Kosher Red Wine, Hamilton

Photo Credit: La Seine
The cocktails are 100% Kosher. The wine list is 100% Kosher. The meats, vegetables, risotto, Israeli couscous, pastas, chocolate souffles; all 100% Kosher. And all 100% delicious. My meal there was pretty epic. Reznik presented us with not one, but two amuses: first, a tall shot-glass filled with spicy tuna, cauliflower puree, avocado mousse and cilantro blossoms, followed by a bite of braised short rib mounded on a crisp piece of chicken skin. Warm, rich, indulgent; they were a wonderful teaser of what was to come.
Amuse #1 | Spicy Tuna, Cauliflower Puree, Avocado Mousse, Cilantro Blossom 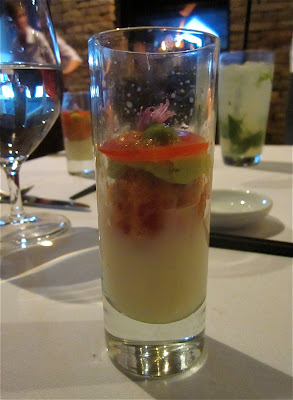 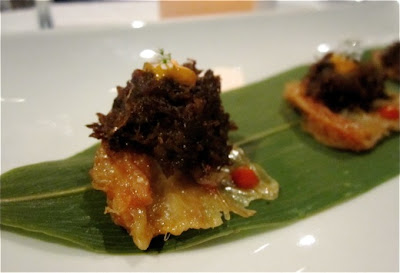 Sushi was next on the agenda. Chef Reznik served a Japanese-inspired ceviche with Big Eye tuna, yellowtail, albacore, avocado and sliced kumquats. Scoop a bit with a crisp wonton and consider your palate cleansed. Then came the Godwin Roll, two pieces of which were enough to convince me to return to La Seine's sushi bar, regularly and with husband in tow. There's no way he could turn down a roll filled with yellowtail, spicy Big Eye tuna and avocado, tempura-fried and drizzled with housemade Sriracha.
Japanese Inspired Ceviche | Big Eye Tuna, Yellowtail, Albacore, Avocado, Kumquat 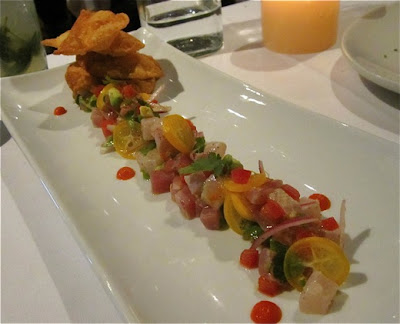 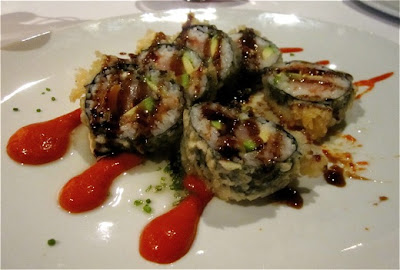 On to appetizers. Yes, we're only at appetizers. First, a plate filled with all things offal: Bone marrow, corned beef tongue, and veal sweetbread nuggets served with garlic crostini, cornichons, banana ketchup and wasabi soy. I found myself face to face (or tongue to tongue) with beef tongue, something I've managed to successfully avoid for 31 years. It's a simple testament to the quality of Chef Reznik's food that I (begrudgingly) broke my tongue fast, but I have to admit I was surprised at the tenderness and delicate flavor. The ground veal sweetbreads were fantastic; if you need to fool yourself to eat them, just imagine they're deliciously fried veal meatballs. One bite and you'll want to finish the entire nugget.
A small bowl of housemade fettuccine botarga (dried and cured fish roe) followed, served alongside stinging nettles, baby artichoke and spring onions. Keep in mind four of us shared the meal's bounty, otherwise we would have been rolled out of the restaurant by this point. The pasta was appropriately al dente, sweet from the braised onions and ever-so-salty from the botarga.
Bone Marrow, Corned Beef Tongue & Veal Sweetbread Nuggets | Garlic Crostini, Cornichons, Banana Ketchup, Wasabi Soy 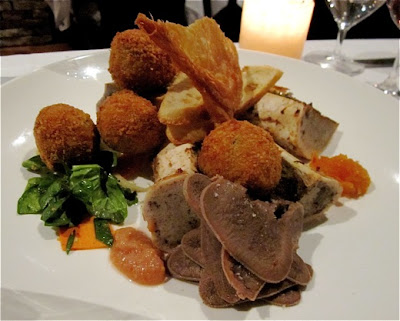 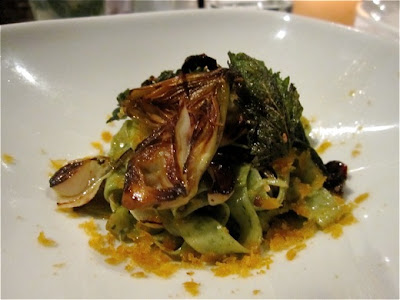 On to the fish. Halibut with fiddlehead ferns, French lentils, roasted heirloom tomato was crisp on the outside, moist inside, and won me over from the presence of the Fiddlehead ferns and French lentils alone. A stunningly beautiful portion of seabass with tomato-lemongrass consomme, fried quinoa and red caviar hit it out of the park.
Seabass | Tomato-Lemongrass Conomme, Fried Quinoa, Red Caviar 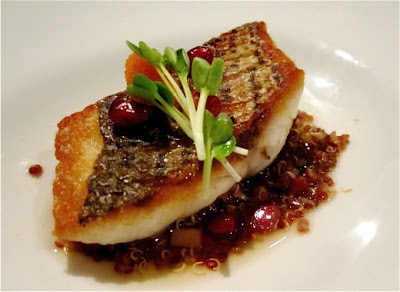 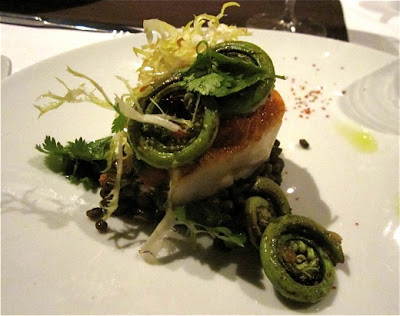 Nine ounce hangar steaks resting on a bed of spring pea risotto (again, all Kosher), was unanimously voted the best hangar steak any of us had ever had. And that's a serious statement. The Rib Eye "Two Ways" with Israeli couscous and purple artichokes was gorgeously marbled, but surprisingly the flavor didn't stand up to the hangar.
9 oz. Hangar Steak | Spring Pea Risotto 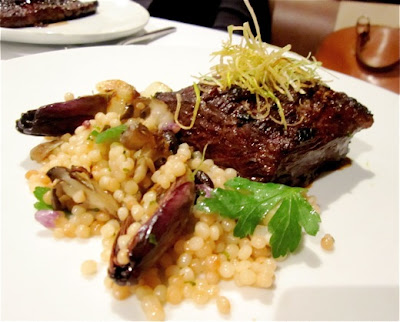 Anyone who says they don't have room for dessert is typically lying, but in our case, we really didn't have room. Until three of them showed up at the table, that is. Chocolate ganache cake with cocoa nibs, sea salt, praline ice cream, and a shot of chocolate bourbon milkshake took us back to the days at elementary school when we were able to stuff ourselves with ooey-gooey chocolate sheet cake slathered with chocolate frosting. An upgraded version in the best possible way, sprinkled with sea salt. We conquered the chocolate souffle with green tea ice cream, scraping the sides to indulge in every last bite. And last, but certainly not least, the strawberry, blueberry and lime/mint sorbet trio were refreshing and light.
Chocolate Ganache Cake | Cocoa Nibs, Sea Salt, Praline Ice Cream, Chocolate Bourbon Milkshake 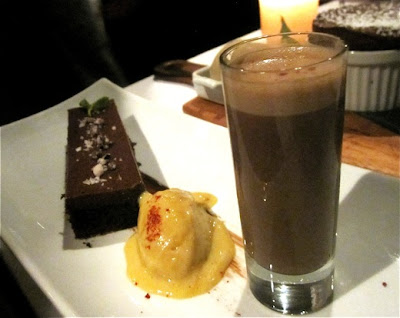 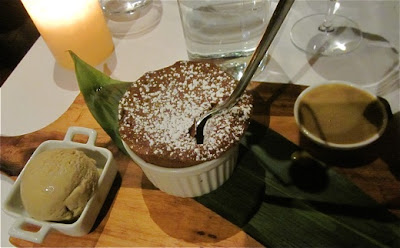 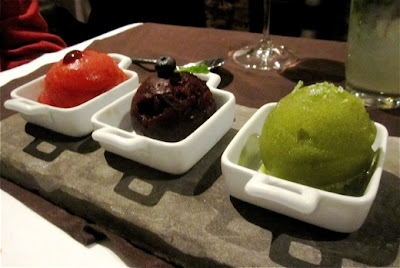 Afterwards, we weaved our way out of La Seine through through a sea of energized Orthodox bar patrons happily awaiting their tables. Once outside, we all looked at each other, then back at the jam-packed restaurant, and couldn't believe our eyes. Finally, a restaurant at 14 La Cienega Blvd. that both stands a chance at success and has a built-in clientele. A French/Sushi/Kosher-certified restaurant with a Top Chef contestant running the kitchen, no less. Hey, stranger things have happened. :)
La Seine
14 North La Cienega Blvd.
Beverly Hills, CA 90211
(310) 358-0922
Reservations available on OpenTable
Hours:
Sun-Thurs: 6-11pm
Closed Fridays
Sat p.m.: Open after Shabbat-2am
Thanks to Joey and Max from Wagstaff and E*starLA for sharing such a great experience!
Crumbs left by Christie Bishop at 9:00 AM