From W Hollywood's Delphine to The Montage's Scarpetta to The Four Seasons' Culina, transforming L.A.'s hotel restaurants from forgettable to five-star is seemingly becoming routine. Now Tony DiSalvo (Gramercy Tavern, Jean Georges, Jack's) is making his mark as executive chef of Whist, inside Santa Monica's Viceroy hotel. I talked to the Sicilian chef about his inspiration behind Whist's new Mediterranean menu, how long it takes to make 1000 meatballs, and why he'll never, ever work as a private chef again.
Where were you before you joined Whist?

Tony DiSalvo: I spent seven years at Jean Georges, from 1997 to 2004, working my way up from a line cook, to eventually, spending the last three years as executive chef. In 2004, I moved to La Jolla, California, to open Jack's. After a few years I left La Jolla and went back to New York to cook as a private chef for five years. It was a really tough; some of the clients were pretty bad so I came back to Southern California and joined Whist in August 2009.

How did working in a NYC kitchen compare to L.A.?

TS: I actually work longer days here than I did in New York; I'm [at Whist] about 12-14 hours a day. In New York, I rolled in around noon and was done by 10 p.m. But that was also when I wasn't executive chef when I was at Jean George. The talent pool was much more concentrated and everyone was really disciplined. But I had to add on a two-hour commute since I was going from NYC to Westchester County. Now I just ride my bike five miles to work, although it takes me twice as long to ride home at night because I'm so tired. It's also hard to bike home when you're all sweaty from the kitchen and have to bike home in the cold.

Chef DiSalvo's Garlic Shrimp with lemon compote
When did you start revamping the menu?

TD: Any time a new chef takes over, he/she works very hard to get the menu changed as fast as possible to his own food. I had a plan in place and start to finish it took about 6 weeks. There was a lot of training involved, plus in a hotel, there are a lot more parts than in a freestanding restaurant.

What were the biggest changes you wanted to make?

TD: The first change was a smaller menu. Eight apps and eight entrees. The menu grew gradually, since then, and now we are up to about 30 items. There are a lot of options, at many price points. Portion sizes vary as well, from shareable bites to large, hearty entrees like the glazed lamb shank. There are two parts to the menu; a casual part and a more refined part. The whole menu now offers a more casual way to eat, because it's mostly small plates geared for sharing like the meatballs, flatbread and garlic shrimp. At the same time, there are more refined dishes that still make the restaurant a good place for special occasions. But we really wanted to make a lot of changes to the place, because it was... pretty stuffy. But we're trying to change that and give it a much more casual feel. We get a lot of [The Viceroy's] hotel guests eating here, but we also get a lot of locals. We want to cater to them.
Veal Meatballs with Grilled Bread 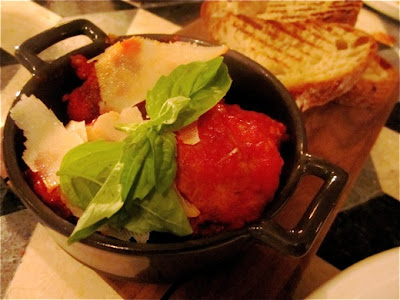 What cuisine(s) influenced the new menu?

TD: The menu's influence is mostly Mediterranean but there are flavors from all over, like the braised lamb shank with Northern African spices. But my real passion is for Italian food. I'm from a Sicilian family; my dad moved here when he was four, so I'm really influenced by Italian flavors. I love that Southern California's coastal climate is very similar to that of Italy, and you can grow a lot of the same things.

SI: What are some can't-miss new items?

TD: The meatballs, which I make with veal, pork, ricotta, breadcrumbs soaked in milk, pancetta and prosciutto. I let them simmer in a saucepan filled with canned tomatoes for four hours, so they get really tender and give the tomatoes a great flavor. They're really popular; I make about 1000 meatballs every week. The braised lamb shank is also good and we work really hard on it. We marinate it overnight in a dry rub of allspice, caraway, cinnamon, cumin and paprika. Then we braise it with garlic, thyme and tomato really long and slow, for about seven hours at 250 [degrees]. It's fall-off-the-bone tender, and we serve it with farro grain and baby eggplant.
Whist's Braised Lamb Shank
SI: Flatbreads and pizzas are still the rage in L.A., but your flatbread has a puff pastry crust. How come?

TD: The current flatbread has caramelized onions, potato and goat cheese on it, so it seemed to me that the flaky, crispness of puff would be a good contrast. It is not a pizza at all, and not meant to compete with other pizzas. We will, however, start doing our wood-fired pizzas again, once the weather warms up... stay tuned.
Puff Pastry Flatbread 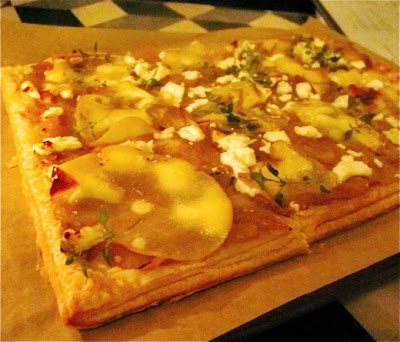 SI: I have to ask; why no cheese inside your arancini [fried risotto balls]?

TD: There is cheese in it, but I don't put a cube of cheese in the middle. That's the old-school Italian way of making them. When I'm at home; I definitely add peas to the mix and put a block of cheese in the middle. But here, you've got to know your clientele. We're in Santa Monica so I'm trying to make traditional Italian food a little bit healthier.
Arancini (fried risotto balls) with Tomato Sauce 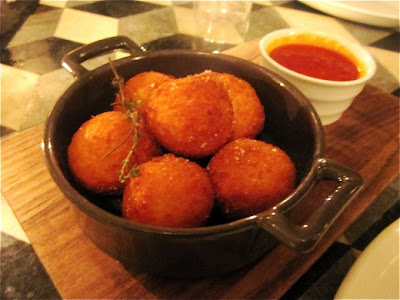 SI: Any crazy experiences you can share during your private chef days in NYC?

TD: The last straw was the day we returned to Greenwich, Connecticut, on the private jet from a three week stay in Aspen. After serving breakfast, before the flight, and lunch on the flight, the family had a dinner party that I cooked for. The kicker? Guests arrived an hour after we landed. That was my last day.
Crumbs left by Christie Bishop at 3:00 PM