Griddlecakes. Pancakes. Flapjacks. Heck, there's even the Danish aebleskiver. Aside from a high-octane cup of coffee, there are few things that I love more than a towering stack of fluffy pancakes laced with butter, dripping with sticky maple syrup, or perhaps even dusted with powdered sugar. After a month-long holiday binge -- okay, maybe a week's worth of bacon and pancakes for breakfast wasn't the smartest idea -- my waistline and cholesterol level simply can't afford any more indulgences. But are great-tasting, healthy pancakes the unicorn of the breakfast food world? Do they even exist?

It turns out they do. During a recent early morning visit to Century City's Greenleaf Gourmet Chopshop, I found them: corn hotcakes, light, golden brown and topped with fresh blueberry compote and warm agave. Unlike their buttermilk cousins, these corn hotcakes aren't going to weigh you down, nor will they land you comatose after a 10 a.m. blood sugar crash. Instead, Greenleaf's chefs Kristi Ritchey and Jonathan Rollo (Patina Group, Eat On Sunset) make the corn hotcakes with cornmeal, skim milk, egg whites, vanilla bean purée, and lemon zest, filling them with flavor rather than fat.

Compare that to the pancakes I've been stuffing my face with for the past month and I really wish I had found them earlier: the cornmeal adds fiber (versus zero-fiber refined white flour) and texture, giving the hotcakes a great crispy crust. The skim milk provides moisture without the added calories of whole-fat dairy products, while the subtle aroma of vanilla bean and lemon zest takes your senses by storm before your first bite. The hotcakes are cooked on a griddle with cooking spray, then topped with the chefs' blueberry compote made with whole blueberries, agave nectar, vanilla bean purée, and lemon juice for sweetness and tang. If that wasn't enough, they've replaced maple syrup with warm agave nectar. Fun fact: Agave is lower on the glycemic index than other refined sugar syrups, and is sweeter, so you don't need as much to get the same sweet taste. 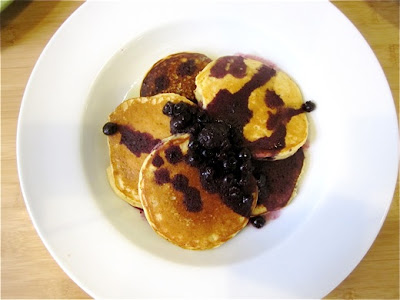