Bryan had the boys over to play poker last night. I was headed out for a night with the girls but wanted to leave the guys with something great that they could munch on – not to mention, soak up bottles and bottles of beer – before I left. Bryan told me that typical poker food included a fabulous combination of bowls filled with chips, nuts, pretzels, etc. I responded with four words: "Not in our house." Don't get my wrong; there's absolutely nothing wrong with bowls of snacks. But I couldn't – in good conscience – just open a bag of chips, dump it in a bowl and say, "See ya! Have a good night!" It's like the fast food cop-out, plus I knew I could make something way more delicious in practically the same amount of time. So here's what I did. Considering there wasn't one left when I got home, I think the boys enjoyed them!
Nate 'n Al's Bishop's Best Sandwich (that's our name for it, not theirs) 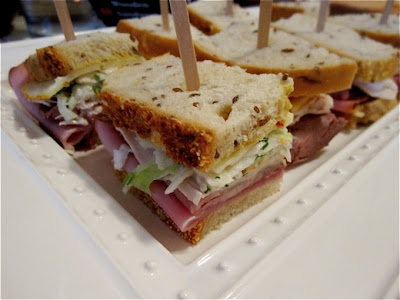 I asked Bryan what he thought about making miniature versions of one of – in my opinion, anyway – the city's BEST sandwiches from Beverly Hills staple, Nate 'n Als Delicatessen. It's the Jewish version of Santa Monica's Bay Cities Italian Deli. I've been eating their food since I was a kid, as my mom always got Nate 'n Al's for summertime backyard dinners. I introduced Bryan to the sandwich when we first started dating: it's made with layers of fresh roasted turkey, black forest ham, roast beef, cole slaw, muenster cheese, spicy mustard and Russian dressing on fresh-baked rye bread. While I get it without roast beef, it's just an amazing sandwich. Apparently the thought of the sandwiches for poker night was good, because Bryan agreed with a resounding "YES!" So come Friday, off to Nate 'n Al's we went, getting all the ingredients for the sandwiches and ordering separate sandwiches for ourselves. It was lunchtime, after all!
Now I'm sharing the recipe with you. There are lots of step-by-step photos, so it's a snap to figure out and make. I hope you enjoy it as much as we do!
Deli packages from Nate 'n Al's 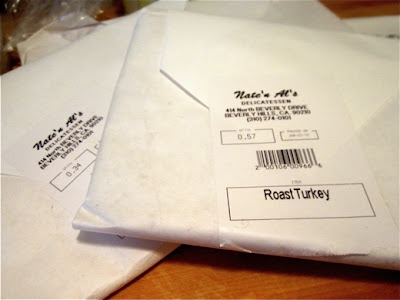 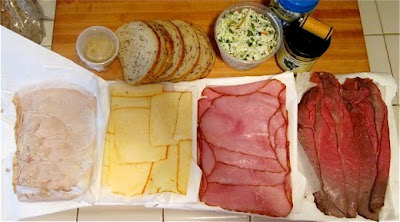 Step #2: Lay out bread for each sandwich. Spread Russian dressing on one slice and spicy mustard on the other (I've shown mayo because I forgot to buy Nate 'n Al's Russian dressing). Add a slice of Muenster cheese to one of the slices. 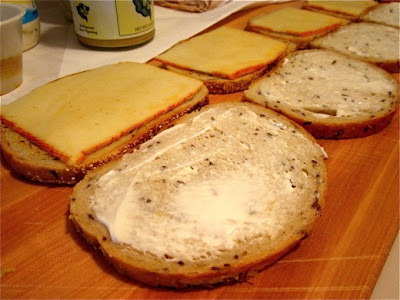 Step #3: Fold a slice of ham and lay on the opposite slice of bread. 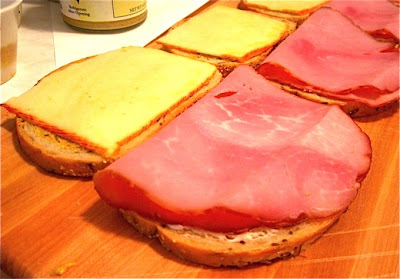 Step #4: Top the ham with a slice of roast beef. 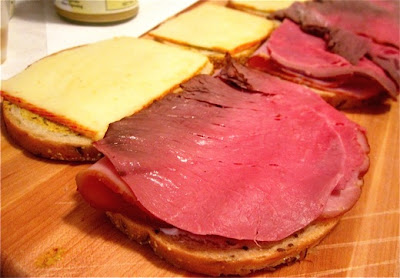 Step #5: Top the roast beef with a slice or two of roasted turkey breast. 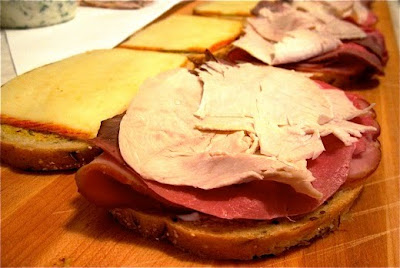 Step #6: Top the layer of meat with an even layer of cole slaw (about 2 tablespoons), spreading it to the edges of the meat. 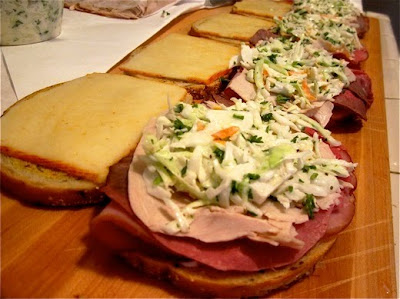 Step #7: Top the sandwiches with the other slice of bread. The Muenster cheese acts as a barrier between the cole slaw and the bread, preventing it from getting soggy. 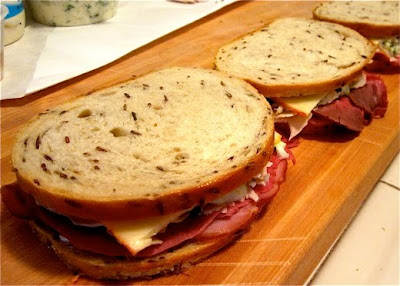 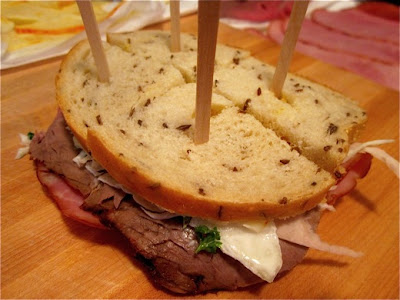 Step #9: Assemble the sandwiches on a platter – or two, after all you're making 24 mini sandwiches – and serve with small plates and cocktail napkins. The sandwiches can also be made ahead of time, covered with a layer of plastic wrap and refrigerated until it's time to serve. 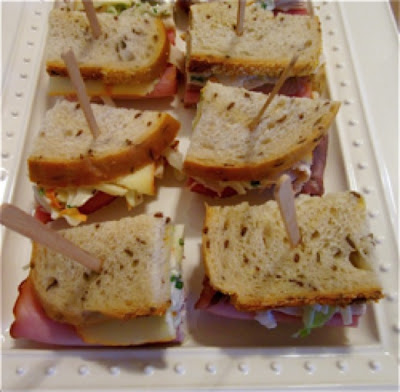 Step #10: Serve and enjoy! These guys are popular, so make sure you get one. Or, better yet, just buy extra ingredients to make one for yourself later. Oh, and get a pint of potato salad. It's the best around.