Another lunch truck experience, this time at the Willoughby Road food truck. I've got to tell you; this lunch truck was awesome, easily better than some LA so-called BBQ restaurants. The menu had a traditional barbecue focus with a few innovative touches (Atlantic cod po' boy or curried grits with shrimp, anyone?), but more importantly, the food was straight-up solid.
Willoughby Road Food Truck 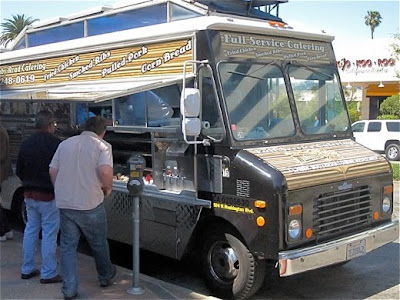 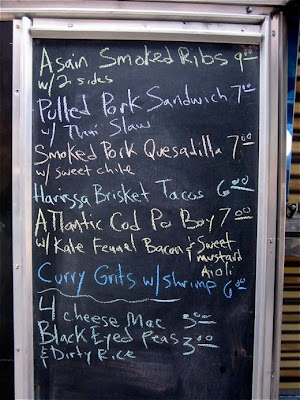 Keeping it short and sweet, Bryan got the Harissa brisket soft tacos while I got the pulled pork sandwich. The brisket tacos were served on corn tortillas and topped with cabbage slaw and spicy salsa. I was surprised that the brisket was chopped rather than shredded, but the taste was great. As we stood holding the tacos, a guy walked by and demanded to know what we had. Ten minutes later we saw him as we drove away, tacos in hand, shoving one by one into his mouth. Guess he liked them as much as we did!
Willoughby Road Harissa Brisket Tacos 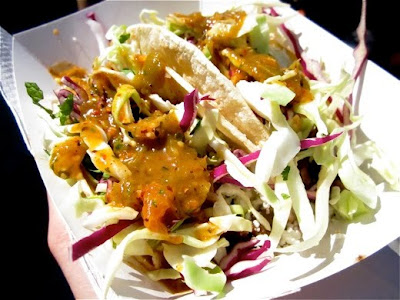 The pulled pork was great. A toasted bun piled high with tender shredded pork (bonus point for no gristle whatsoever), full barbecue flavor but not overpowered by the sauce. The crunchy cabbage slaw was a smart topping, adding contrast and refreshing flavor to the shredded meat. I forgot to ask if Willoughby Road makes their own barbecue sauce or a store bought version, but either way, I loved it. We were happy to pay $7 for the sandwich and $6 for the tacos, eating in the shadow of a bubbling fountain on a beautiful Southern California day. All in all, thirteen bucks and two full tummys later, we were happy lunch truckers.
Willoughby Road Pulled Pork Sandwich 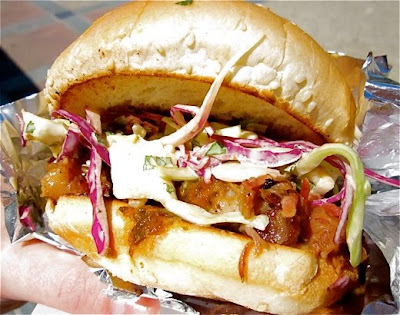