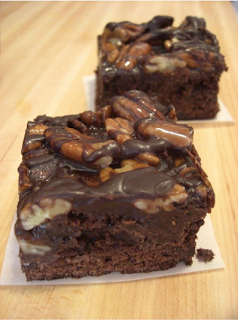 My good friend, Erika, has been our sweet-toothed superhero, bringing treats to Bryan and I throughout his treatment period. Early on, when Bryan didn't have much of an appetite (that's an understatement), Erika emailed and asked what type of sweet Bryan was craving. I had grown accustomed to making all the food-related decisions in our household, so I was expecting Bryan to answer with an underwhelmed "whatever she wants to bring."

Lo and behold, I got a huge surprise when I asked Bryan, "what sweet do you want Erika to make?" and he practically screamed, "TURTLE BROWNIES!!!"

It was like one of those Christmas home videos where a kid opens the present of their dreams and starts to act eerily similar to a mental patient. Screaming, jumping, whooping and hollering, all in the name of some immobile action figure or streamer-laced bicycle. Minus the jumping, Bryan was similarly passionate about the idea of turtle brownies.

So Erika, being the slight overachiever that she is, took on the task of making – from scratch, mind you – not just brownies, but TURTLE brownies. That means slaving over a homemade caramel, pecan topping and even a chocolate ganache drizzle. When she emailed and said she was on her second batch of homemade caramel because the first one hadn't turned out so great, I felt terrible. I had visions of hot sugar burns in my head, but thankfully, that didn't happen. A week later, Erika stopped by with the world's great batch of brownies. And while I have a tendency to exaggerate, this is no exaggeration. These brownies are like crack, and while time-consuming, I've gotten them down to a two-hour relay, start to finish. If you're not a fan of nuts, I've substituted the turtle topping for Trader Joe's mini chocolate peanut butter cups. Equally delish for the peanut butter fanatic. 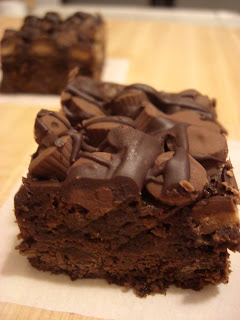 Chocolate Chip Brownies
Preheat oven to 350 degrees. In medium pot, heat butter, sugar and water until butter melts. Stir in 12 ounces of chocolate chips and the vanilla. Cool to room temperature (I cheat and put the bowl in the freezer, stirring every few minutes to release the heat). Once the chocolate mixture has cooled, whisk in the eggs, one at a time. Add flour, soda and salt and add to chocolate mixture and whisk well. Add remaining 12 oz chocolate chips. Pour into 9”x13” greased or parchment-lined pan and cook for 40-45 minutes. 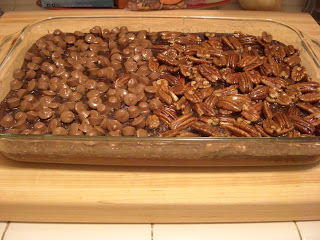 Caramel/Turtle ToppingI usually get this started about halfway through the brownies' cooking time. In a three quart heavy saucepan, combine the sugar, corn syrup, water, and salt. Over medium heat, stirring constantly with a wooden spoon or silicon spatula, bring the mixture to a boil. Once it boils, stop stirring, and cook the mixture until it turns a golden caramel color, about 15 minutes. Swirl the pan as needed so the caramel cooks evenly. Be careful of sugar crystals forming on the sides of the saucepan, as these can ruin the caramel. An easy fix? Once the sugar mixture starts to boil, put a lid on the saucepan for about 3-4 minutes. The resulting condensation will help remove any sugar crystals. Once the mixture starts to look the color of "caramel," remove from heat and CAREFULLY yet quickly add the cream and vanilla. The mixture will sputter and steam so be on the lookout for burns. Stir in the pecans and immediately pour over the still warm brownie layer, spreading evenly. The caramel will cool quickly and threaten to "rip" the brownies, so work fast. Let cool to room temperature, then cover and refrigerate brownies for about an hour or until the brownies are firm.

Place the chopped chocolate in a heatproof bowl. Heat the cream in a small saucepan over medium heat (alternatively, heat the cream in the microwave but be careful as it will boil over quickly). Bring just to a boil. Immediately pour the boiling cream over the chocolate and allow to stand for 5 minutes. Stir with a whisk until smooth and silky. Remove the brownies from the refrigerator and, using a fork, drizzle the ganache over the brownies in a zigzag pattern. Cover and refrigerate until the chocolate is set. Using a sharp knife, cut the brownies into bars (however big or small you want!).

Store, covered, in the refrigerator for 7 to 10 days, or in the freezer for longer storage.