Turning a Losing Streak Into Deliciousness

Today was USC's homecoming football game against Stanford. Homecoming is obviously a big "RA-RA-GO-USC!" kind of day, so Bryan and I really wanted to go see a lot of our friends at his fraternity's tailgate. It's easier than it sounds, because Bryan and I haven't been to a football game this season for obvious reasons...cancer recovery doesn't exactly bode well for maneuvering through a 90,000+ person crowd. To make sure that we didn't miss Homecoming, a few of our friends were extraordinarily helpful by giving us an on-campus parking pass as well as arranging for a golf cart to take us directly to the tailgate. Talk about first class! Nevermind that our friend driving the golf cart was drinking Wild Turkey directly out of a Snapple bottle; that's a story for another time.

We made it safely through the tailgate and got to rally with friends for a few hours. Campus was a sea of Cardinal and Gold with such a great vibe; everyone was excited, energized and ready for a great game day. Bryan and I stayed at the tailgate until just before noon, then were shuttled back to our car to make sure we got home to see kick-off at 12:30pm.

That was about when the positivity ended. Stanford scored twice in the first quarter, leaving me with a "sinking ship" kind of feeling. While I'm a big USC football fan, Bryan is DIE HARD. So about halfway through the second quarter, I couldn't take it anymore. While he sat and supported our team and FOX Sports' ratings, I needed to do something else to keep me from focusing on a losing game.

So I went into the kitchen, scoured through the cabinets and decided that even if USC couldn't win, I could salvage the day by whipping up some fun Fall-themed treats. After a survey of ingredients, I started on a batch of Pumpkin Cupcakes. But – you might be saying – didn't I just make pumpkin cupcakes earlier this week? Yes, I sure did. And today wasn't a time for a new recipe; it was a time for something comfortable, reliable and delicious.

But that doesn't mean I didn't put an entirely new spin on it.

The recipe is the same as my earlier Pumpkin Cupcake recipe, but this time I decided to be much more experimental with the icing flavor and application. I followed the traditional cream cheese frosting recipe but added about two tablespoons of cinnamon and a 1/2 teaspoon of pumpkin pie spice. I used an electric mixer to get the icing to it's "creamy and fluffy happy place" (or is that my happy place?) then scooped it into two piping bags with different tips (tips #22 and #31 from Surfas, I believe). 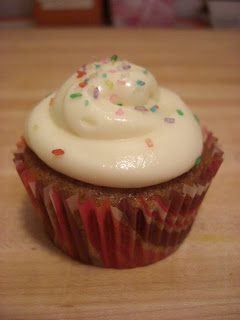 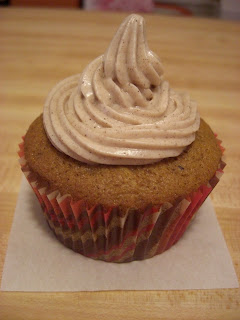 Now by no means am I a master piper. I'm barely a novice piper, if you can even call if that. My "piping" experience consists of being creative enough to scoop frosting into a Ziploc bag, cut off the corner tip and "pipe" from the bag. No professional tip, bag, nothing. It's always come out well, but every time I start I have the fear that the result will look like a kindergarten art project. Cute, but in an "Awwww, I have to put this finger painting on my refrigerator but don't really want to" kind of way. Luckily, it's never gone that south.

Today's piping experience was more difficult because I was using tools I've not used before. A professional piping tip, a professional piping bag, and a "attachable ring" that you can use to exchange various tips without switching to an entirely new bag. I was really excited, but the situation got messy. Really messy. Cinnamon frosting was everywhere; on my hands, the cutting board, the bowl, the bag, spoons, the counter. You name it, it was frosted. But that's okay, because my kitchen turned into an edible Cinnamon wonderland. It's not like gardening or painting, because you can't exactly lick dirt or oil-based paint off of your fingers. I suppose you could, but you might have serious mental and physical problems.

After all was said and done, the piping ended up going quite well. A few cupcakes ended up as sacrificial lambs, but it didn't matter because it gave me an excuse to eat them. You can't have ugly cupcakes sitting around, right? Right.

You can see my piping attempts in the photos, as well as some Pumpkin Chocolate Chip Cookies I made from the last bit of the pumpkin cupcake batter. I just threw in a handful of semi-sweet chocolate chips, scooped them onto a Silpat-lined baking sheet and baked them for about 12 minutes. Since the batter had baking powder in it, the cookies turned out much fluffier than my tried and true cookies. A different, yet equally delicious result. 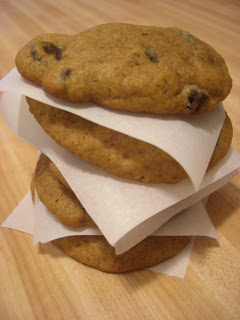 So while USC ended up losing miserably to Stanford, I turned lemons into lemonade. Or rather, a losing streak into deliciousness. Yum.