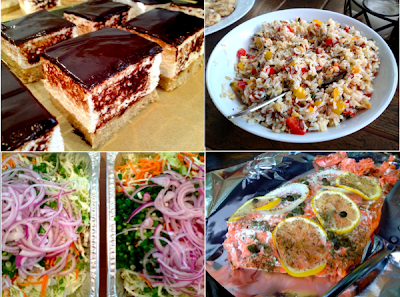 Turns out whoever said, "Something's gotta give" knew what they were talking about. It's no surprise that over the past two months, my posts to Pardon My Crumbs have been sporadic (at best). The best explanation I have is a vulnerable one: The misery of my (thankfully previous) job knew no bounds. I felt unappreciated, unfulfilled, and unable to do what I had been hired to do. My misery took its toll at home, too. Not only was I not cooking, trying new restaurants or blogging (a few of my favorite things), I could barely lift my head off the pillow in the morning. Evenings became time to sit alone while Bryan was at work; staring blankly at the wall, dreading the next workday and wondering how I could get out of a job situation tactfully described as unbearable. Perhaps more importantly, I wondered how I could get back to feeling like myself again: a (mostly) happy, (delightfully) sarcastic and take-life-by-the-horns kind of girl?

Long story short, I took matters into my own hands. I refused to settle, refused to let someone else make me miserable, and refused to lose my competitive edge at work. I dragged my depressed ass out of an emotional (Sarlacc) pit, networked like hell and landed myself a new gig. But in that two month's time, something had to give. Unfortunately, it was regular posting to my blog. But the hiatus is over. :)

Here is just a hint of what's the come: fool-proof recipes like Mallow Bars, Israeli couscous, Asian slaw, barbecued salmon and a to-die-for banana cake with vanilla buttercream. That's in addition to time-saving, crowd-pleasing menus just in time for college football season (go Trojans!). Bottom line is there's so much to get caught back up on... so let's get to it.

On behalf of Pardon My Crumbs, thank you for Pardoning My Absence. It's good to be back!
Crumbs left by Christie Bishop at 7:53 PM