Last Friday, AltaMed hosted the sixth annual East LA Meets Napa in the heart of downtown Los Angeles. The event, which celebrated the success of both East LA's Mexican culinary community and Latino-owned vineyards in California, took over historic Union Station's flow of gorgeous Spanish courtyards, intermingling tables serving mini plates of authentic Mexican eats with nearly 30 Napa-based wine tasting stations. The nearly forty participating restaurants represented some of the best of LA's Mexican cuisine, and better yet, many of the restaurants are family-owned by generations of East LA residents. Each restaurant's featured dish -- ranging from shrimp taquitos, to sweet corn and scarlet quinoa tamales, to pork skin quesadillas, and a bounty of moles -- was paired with wines like crisp Sauvignon Blancs, spicy Zinfandels and bold Cabernet Sauvignons.

As the sun set over downtown LA, the event flooded with ladies dressed in colorful cocktail dresses and summer-inspired wedges, and men who ditched their jackets and rolled up the sleeves of their button downs. Live music flooded the courtyard, setting the mood for hungry guests doing their best to balance plates, wine glasses and the occasional napkin. To say people had their hands full is an understatement, but it was either maneuver the crowd with your plate+glass combo or miss out on sampling the goods. We heard some guests devising creative strategies to get the most mole for their moolah, while others patiently stood in line at each table, chatting, munching and mingling. 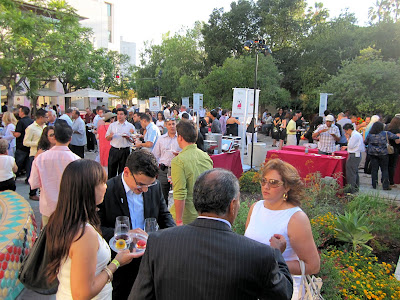 If there was a culinary theme to the evening, it would easily be "Holy Mole!" The famed 40+ ingredient Mexican sauce -- prevalent in East LA restaurants -- played a prominent role at nearly every station. Velvety black mole was slathered on sweet corn tamales and mini pork tostadas, flowed off the edges of fried tortilla rounds, and drizzled into shredded chicken tacos. Green moles -- tomatillos and cilantro lend the sauce its "green" color -- topped chicken skewers and mini Chile Rellenos stuffed with shrimp.
Homemade tacos proved to be the second theme, filled with everything under the sun: shrimp, pork, chicken, carne asada, zucchini blossoms, bell peppers, goat cheese... You name it, it was in a taco. Steaming tortillas, fresh off the griddle, were available at every turn. As were endless bowls of creamy guacamole, perfect for taco dipping and later, finger licking. Hindsight being 20/20, I'm fairly certain thousands of tacos and an unfathomable amount of guacamole was consumed on that balmy Friday evening.
The Wine Corridor 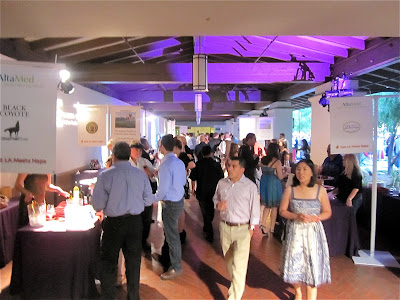 While the authentic Mexican food was fantastic, so were the tiny details that made up the East LA Meets Napa event itself. Compared to many foods events throughout the year, East LA Meets Napa was incredibly well run. The crowd never seemed impossible to maneuver. The plate+wine glass combo showed forward-thinking. Cocktail tables with sunflower centerpieces dotted the landscape, never out of reach for a quick rest or a flat surface to eat on. The event guide included a map revealing the location of each specific restaurant and winery's station. Those same stations were strategically placed throughout the courtyard, creating a nice flow without any traffic jams. While mole and tacos seemed to be strong suits, the cuisine was versatile and flavorful. The wines were refreshing and perfectly paired for the food at hand.
We're looking forward to returning next year and supporting the cause. But thinking about last week, some of our favorite East LA tastes of the evening came from the following restaurants:
Mini Tostadas from Homegirl Cafe & Catering 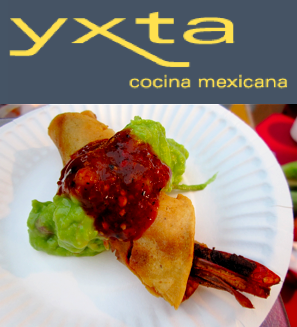