Obika Mozzarella Bar: A Taste of Italy In L.A.

When I first heard that Obika Mozzarella Bar was opening in L.A. (the Century City location opened last week; Beverly Center is set to open in November), I was thrilled. You may recall that Bryan and I took a trip to Italy in April. Among the legions of paper-thin prosciutto, cured salumi, stretchy knots of mozzarella, grilled artichokes and homemade pasta that we consumed was an late afternoon apertivo at Rome's Obika Mozzarella Bar. This particular Obika was about 200 yards from our hotel in the Campo di' Fiori, famous for its robust daily farmers' market and after-hours bar scene. A seat on the tiny outdoor patio -- at least in the late afternoon -- provided us with a view of the bustling square as well as a glowing Italian sunset reflecting on the buildings. Ironically, I took a photo right from our seat on Obika's patio, as well as a photo of our plate of prosciutto and mozzarella (shocking, I know). 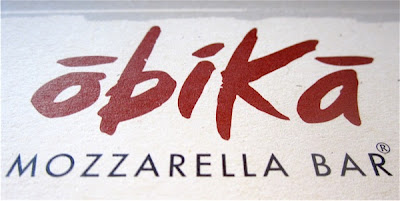 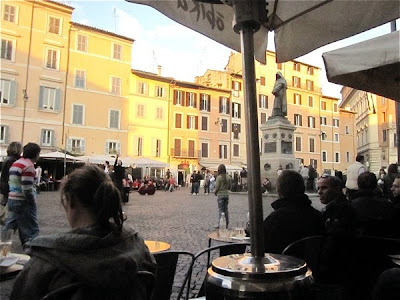 Plate of prosciutto and mozzarella 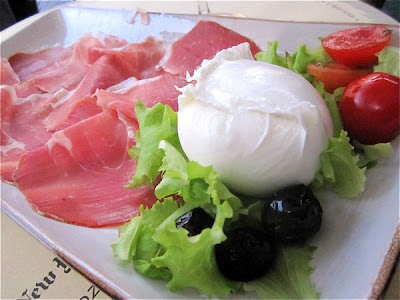 It's been nearly six months since we returned from Italy and as I said, I've been looking forward to Obika's L.A. opening. Bryan and I went to the Century City location today to recreate our Roman afternoon apertivo and I've got to say, with the exception of an unfortunate office tower/mall view, our meal nearly transported us back that small square in Rome.
Obika Century City 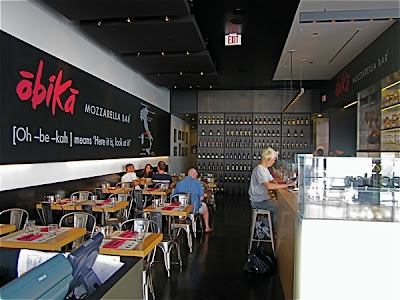 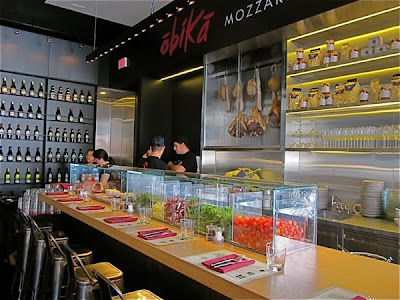 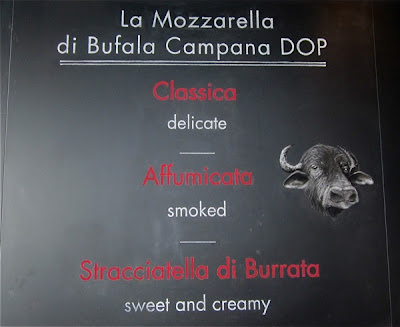 Obika resembles more of a sushi bar than an Italian enoteca, but that's the point. Mozzarella bars have been popular in Italy for years and it wasn't until Nancy Silverton opened Osteria Mozza that the concept made its way to L.A. Obika's menu, the items for which are almost entirely imported from Italy, takes a mix and match approach. Choose one of three types of mozzarellas -- a "Classica" mozzarella, a smoked "Affumicata" variety or a creamy Stracciatella di Burrata mozzarella -- and then pair it with grilled vegetables, a variety of cured prosciutto, salumi and pistachio mortadella or house-made pestos. While the mozzarella is obviously the main event, the menu also includes a small selection of appetizers, crostini and pastas. We ordered a flatbread with sausage patè, Burrata and tomatoes to start, followed by Mozzarella "Classica" with a selection of salumi for Bryan and the Straciatella di Burrata with grilled vegetables and basil pesto for me.
Roasted Bread topped with Spicy Sausage Patè from Calabria, Stracciatella di Burrata, Cherry Tomatoes, Basil, Capers from Pantelleria & Salted Ricotta cheese 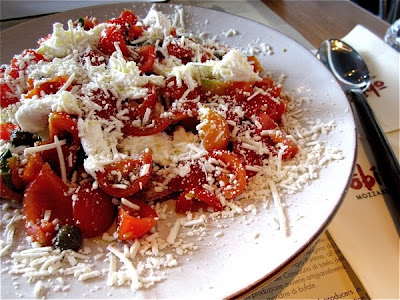 Yes, there was actually roasted bread hiding under the mound of tomatoes and cheese 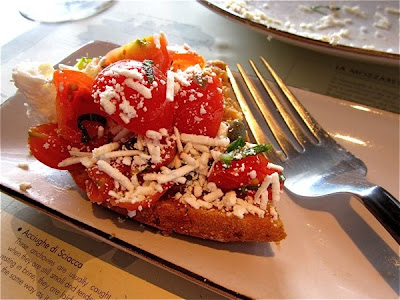 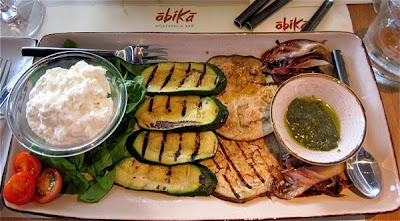 The "bread basket," ironically in a sack made in Lithuania 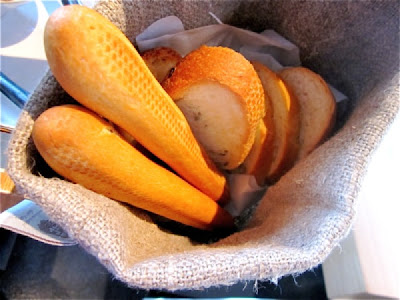 How did the dishes fare compared to Obika's Roman counterpart? Let's just say we cleaned our plates. Food aside, our server was wonderful as well; enthusiastic, knowledgeable and happy to answer my many questions about Obika's pesto recipe, product origins and even discuss our love for the Umbrian countryside. She let us take our time at the table, giving us time to unwind and slowly finish our glasses of wine (a Sicilian Nero D'Avola for Bryan and a Tuscan Morellino Di Scansano for me) after our meal. We must have really relaxed, because before we knew it an hour and a half had passed and I was ordering a Cappuccino to cap off my meal.
Obika's Cappuccino, raw sugar added 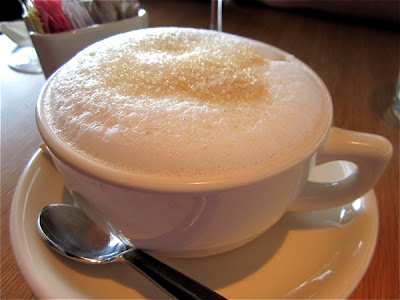 All in all, Century City's Obika was as good as we remembered its Campo di' Fiori counterpart to be. And as true Italians know best, there's just something wonderful about taking in a late afternoon glass of wine, indulging in a few small plates and relaxing in great company. Which is exactly what we did. Obika's only drawback? In the words of food critic Jonathon Gold, who positively reviewed Obika in LA Weekly earlier today, it's still true that "No matter how hard you squint, no matter how tasty the Negroni in your hand, the [Campo di' Fiori] seems very far away." Oh well, at least we have the food.
Crumbs left by Christie Bishop at 7:30 PM