Fourth Annual BISH BALL With All The Trimmings!

Last weekend Bryan and I hosted about 50 of our nearest and dearest at the fourth annual "BISH BALL," a day dedicated to playing softball, tapping an Anchor Steam keg, eating bacon-wrapped hot dogs and most importantly, celebrating Bryan's birthday. The past few years, we had hosted BISH BALL at a field of questionable safety in Hawthorne, where we had to politely ask the local homeless contingency if they would kindly relocate for about seven hours. Last year BISH BALL was on hiatus due to Bryan's poor health. This year, however, we were back with a vengeance: a friend on the board of a little league booked a field nearly eight months in advance complete with AV booth, batting cages, bleachers, snack shack and an outdoor grill station. All that was left to do was order the Anchor Steam Liberty Ale keg (Bryan's favorite) and hit up Costco for all the fixings. For about a week, our apartment was a party waiting to happen.
The BISH BALL Field of Play 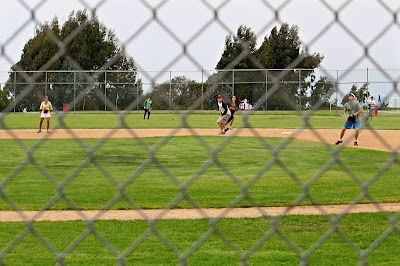 Bryan's parents (now known as our snack shack heroes) flew down for the occasion. His Mom set out tray after tray of nachos -- made with queso dip, tostitos, salsa and jalapenos, if you're wondering -- while his Dad manned the grill to feed Bryan's famous hamburgers and USC's famous "ghetto dogs" to over 50 hungry athletes. Bryan made the burgers with Worcestershire, salt, pepper, olive oil, garlic and a special blend of spices. And just what is a "ghetto dog," might you ask? It's a specialty served by cart-vendors outside of USC football games: bacon wrapped hot dogs served in a steaming bun and covered with grilled onions, peppers and mustard. They were a hit. And for dessert -- there was no traditional cake this year -- I made individual cupcake burgers: cupcakes cut in half, filled with a brownie, mustard/lettuce/ketchup-colored frostings and topped with sesame seeds. Mmmm mmmm mmmm. Enough said. Although I will admit I forgot candles, so I presented Bryan with the mini cake and an iPhone birthday cake app. Hey, digital candles are better for the environment. :)
Bryan's burgers and ghetto dogs 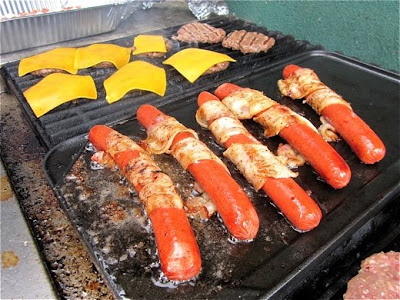 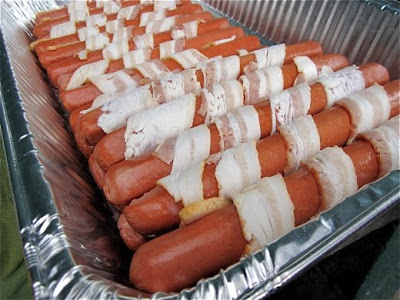 The ghetto dog in all its glory. (Thanks, Greg!) 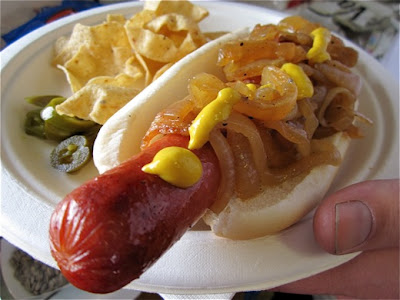 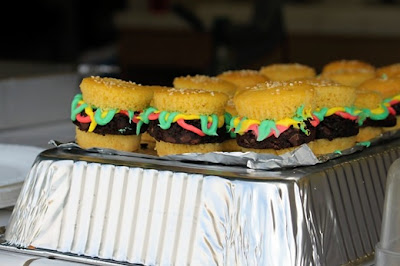 I think everyone had a really great day. The sun was (somewhat) shining, the dogs in attendance were barking and the babies were running the bases in between innings, proving we're all getting a little older, a little wiser and taking the idea of "family" a little more literally. And considering everyone there is part of our "family," it couldn't have been a more special day. Here's to next year!
Crumbs left by Christie Bishop at 8:10 PM