Hosting an Oscar party? Want to jazz up iconic movie snacks? Look no further! I absolutely LOVED these Tasting Table ideas for glamming up Oscar-night popcorn. If you're looking for a DIY option, there's a fabulous recipe for Bacon Truffle Pecorino Popcorn at the end.
Cordelia Culver's Bacon Pecorino Popcorn 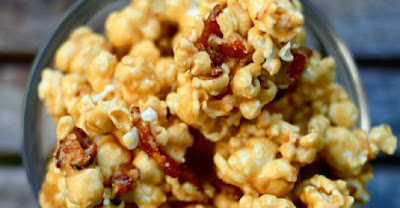 Photo courtesy of Tasting Table LA
At the bar at Hatfield's, fingers fight for space in the complimentary bowls of shallot-garlic-rosemary popcorn placed in front of every customer. Quinn Hatfield first cooks the kernels in garlic-infused vegetable oil, then adds shallot oil, fresh rosemary and sea salt to the popped corn. It's addictive.
The happy-hour popcorn ($6) at XIV celebrates Michael Mina's rule of threes: Fluffy kernels are tossed with truffle butter, chopped black truffles and truffle salt, creating the Champagne of popcorn if there ever was one.
But the award for most decadent goes to the new Sweetsalt Foods Shop in Toluca Lake. While you're waiting for that duck confit, goat cheese and lavender honey sandwich, it's almost impossible to resist the bags of bacon-truffle-caramel popcorn ($3) sitting next to the register.
This earthy, sweet, salty, porky snack (pictured) is made exclusively for the shop by Cordelia Culver, a local chef and caterer. If Sweetsalt is out of stock (it goes fast), make Culver's bacon-Pecorino popcorn for an Academy Award-winning night instead.
Recipe: Bacon Truﬄe Pecorino Popcorn
Recipe adapted from Cordelia Culver
Makes 4 servings
1. Cut the bacon crosswise into ¼-inch-thick strips. In a small skillet, cook the bacon over medium heat until golden-brown, about 10 minutes.
2. Add the butter to the skillet and stir until melted. Remove from the heat and stir in the truﬄe oil.
3. In a large bowl, pour the hot bacon mixture over the popcorn, stirring to coat evenly. Add the cheese, season with salt and serve immediately.
Crumbs left by Christie Bishop at 11:39 AM