Last week Bryan and I hosted a small dinner party to celebrate the birthday of a close family friend. We had dinner ready to go (our go-to homemade pizza recipe), bottles of booze were getting their chill on, but something was missing: dessert! Oh no! You can't have a birthday without a birthday dessert, whether it's a cake, cupcake, pie, or even just a scoop of ice cream. Instead of panicking or running to the store, I knew exactly what I would do: whip up a batch of Adelia's Blondies.
Adelia's Blondies: A Southern Family's Favorite Recipe 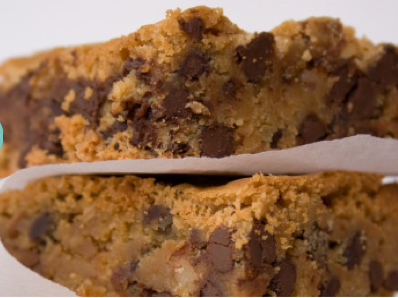 A few weeks prior I had received a packet of Adelia's Blondies mix direct from Nashville, where Amelia's all-natural mixes and recipes for blondies, brownies and oatmeal chocolate chip cookies are made. While Adelia herself passed on at the ripe old age of 97, her great-grandchildren are honoring her legacy (and her name) by passing along their family's favorite baking recipes for bakers like you and me to enjoy.
Adelia's Blondies Mix 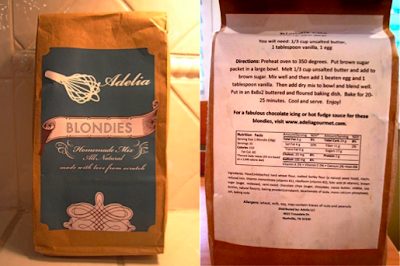 Blondies -- if you haven't heard of them -- are wonderfully soft, chewy chocolate chip cookie bars. Imagine if a brownie was made out of chocolate chip cookie dough, but had the same delicately crackly, caramelized crust on top. Well, that's a Blondie you're imagining and they're absolutely delicious.
Adelia's Blondies Mix couldn't be easier to make. All the dry ingredients -- a flour mixture and a brown sugar -- are contained in individual bags inside the Blondies package. All the "baker" needs to do is provide an egg, some vanilla extract and unsalted butter. Simply melt the butter, whisk in the brown sugar until combined, add one beaten egg and a splash of vanilla. Gently whisk in the remaining bag of dry ingredients until combined, pour the mixture into an 8x8 greased baking pan and let it bake at 350 degrees for 20-25 minutes. Voila! Blondies!
Count 'Em: Blondies' Combined Six Ingredients 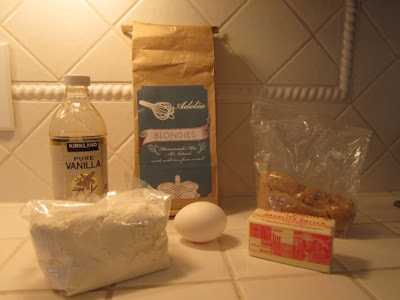 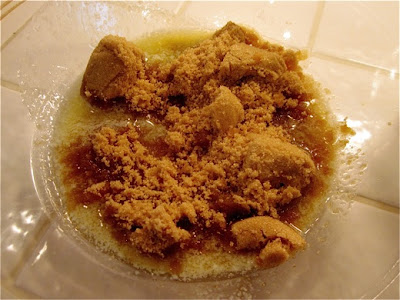 Mix until butter and brown sugar are thorough combined 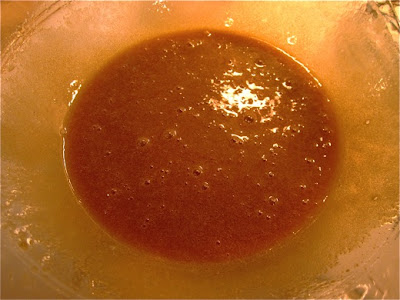 Whisk beaten egg and vanilla to the sugar/butter mixture, then add remaining bag of dry ingredients. 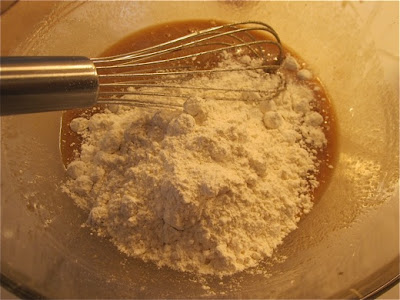 Whisk all ingredients to combine (Make sure to appreciate the abundance of chocolate chips!) 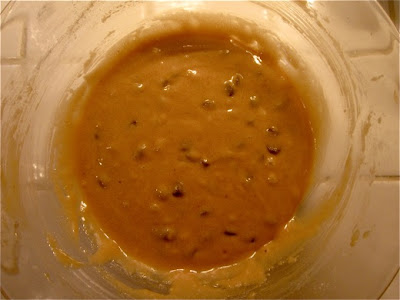 Butter and flour a baking pan (I didn't have an 8x8 baking pan, so opted for a round pan instead) 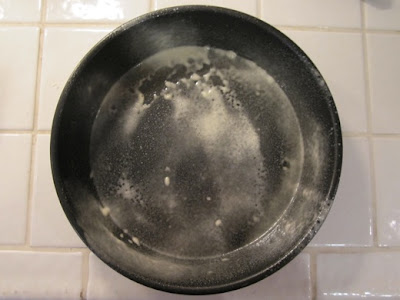 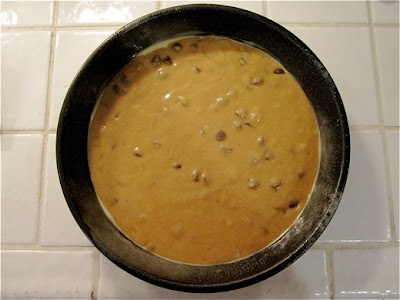 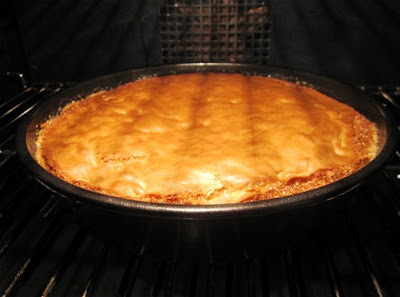 Sounds easy enough, right? It is, except if you're me and you've just moved into your first house and have never used the built-in oven before. Not to mention the oven is a brand you've never heard of, with no manual to be found, and the only "directions" on said oven are hieroglyphic-like squiggles surrounding the oven dial like a clock. Not to worry, you just find a "squiggle" that looks somewhat familiar (two horizontal lines must mean top and bottom heating elements, right??), wait until the oven feels hot enough, and pop in your Blondies. I wish it were so easy.
The photo above -- yes, the one with the perfect looking Blondies -- was taken about when my oven's timer said it was 12 minutes into the 20 minute cooking time. Looking good, right? Well, sadly, just more three minutes passed and the Blondies looked more like Brownies. In a word, I was dev-a-stated. Expecting the worst, I grabbed the poor Blondies out of the oven, flipped them out onto a plate and... was thrilled to see a wonderfully gooey, cookie dough-esque center. All was not lost and gosh, it sure smelled great.
Blondies' Disaster Averted! 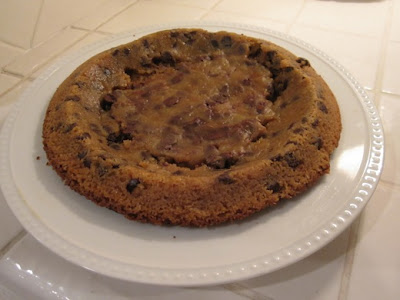 My darling husband, bless his heart, said to me, "It looks like a pizookie," which is essentially a pizza made out of cookie dough. To make one, cookie dough is pressed into a pizza pan and baked until it's a giant, warm, amazing cookie. Then it's typically covered with layers of ice cream, fudge, caramel, nuts, etc. It's a giant cookie pizza with and ice cream sundae as a topping. Who wouldn't want that for their birthday?? My heart sang because pizookies are beyond awesome. And slightly retro, which makes them even more cool.
Adelia Blondie-turned-Pizookie! 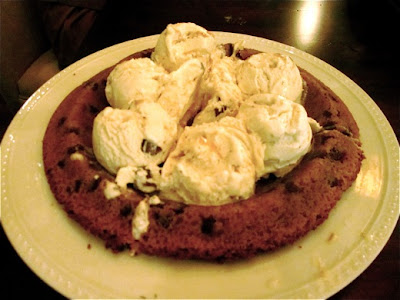 After all was said and done, I averted a major birthday dessert crisis. Adelia's Blondies mix stood up to the challenge, survived my insane oven, and gave a table full of birthday revelers a killer dessert. There was not one bite left, at which point I was forced to physically pull the plate away from my husband so he didn't lick it. I'm looking forward to trying Adelia's Blondies mix again, but this time after I figure out my oven. The fact that their mix delivered an incredibly delicious product even after being tortured by my oven really says something great about their recipe.
If you want to try Adelia's Blondies, Brownies or Oatmeal Chocolate Chip Cookies mixes for yourself, visit AdeliaGourmet.com. Each $8 mix is available for purchase online.
Adelia's Blondies Mix
Available at AdeliaGourmet.com
Price: $8/package
Questions? AdeliaGourmet@gmail.com
Follow: @AdeliaGourmet
Crumbs left by Christie Bishop at 8:00 AM