Save the Date: Dominicks' Crawfish Boil Every Saturday in May!

Whatever you call the little Louisiana crustaceans, crawfish are perhaps most famous for their leading role in Cajun and Creole cuisines. Especially in New Orleans. From andouille sausage and crawfish omelets, to crawfish etoufette, to crawfish pie, it's nearly impossible to find a Cajun dish that doesn't prominently feature the tiny "spiny lobster." This is especially true for one of New Orlean's staple springtime events: crawfish boils! 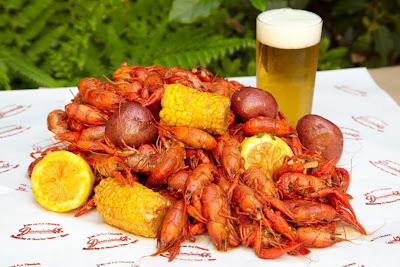 Photo Credit: Dominick's
Never been to a crawfish boil? Let me break it down for you: several pounds of crawfish are ceremoniously "dumped" into the strainer fitting a giant aluminum pot. Boiling water cooks the crawfish until they're bright red and ready-to-eat, after which point they're (again) ceremoniously dumped onto a newspaper-covered picnic table. Add some steamed red potatoes, corn cobs, onions, hot sauce, lemon halves, and a stack of sanitizing hand wipes, and you've got yourself a crawfish boil! Now, how do you eat them? Some people believe freeing the crawfish meat from its itty-bitty exoskeleton is too much work, but I don't fall into that camp. On the contrary, I think it's fun to get your hands dirty, chase the crawfish with an ice cold brew, and enjoy the company of friends. It's also fantastic to watch the inevitable hazing ritual that occurs when first-timers are told the "best part" of a crawfish is "sucking the head" (read: guts). The look on their faces is, well, priceless.

Crawfish boils are few and far between in Los Angeles, but Chef Brandon Boudet of West Hollywood's Dominick's is changing that. At least for one month. Starting Saturday, May 7 and continuing each Saturday of the month from noon to 4 p.m., the New Orleans native and crawfish enthusiast hosts Dominick's second annual crawfish boil. Watch as Boudet seasons 300 pounds of crawfish ($10.99/pound) with salt, garlic, and cayenne pepper, then boils and serves them alongside New Orleans specialities like roast beef Po’ Boys ($8) and crawfish boiled artichokes with Creole remoulade ($11).

Photo Credit: FDL Flavors
No matter how many pounds of crawfish you've downed, make sure to make room for the New Orleans "snow balls" ($3.25), basically a snow cone drizzled with a choice of blueberry, raspberry, chocolate, or coconut cream flavored syrups. Make it really authentic by adding a shot of Old New Orleans spiced rum for $9. If nothing else, it's refreshing and boozy; a perfect combination for a warm May afternoon.