Must Drink: Playa's "A Oaxacan The Clouds"

It's been a cold and blustery few days in L.A. Actually, if I'm being honest our perpetual "72 and sunny" weather has recently given way to heavy downpours, gusting winds and bouts of flooding. The say April showers bring May flowers, but it seems we're a few weeks ahead of schedule. Looking outside at the dark clouds, I'm suddently hit with a craving for a cocktail of a similar name. No, not a Dark and Stormy, but "A Oaxacan The Clouds," served at Chef John Sedlar's latest restaurant, Playa. I first had the cocktail over a month ago at the restaurant's Friends & Family night, and I've actually has it on my mind ever since. You know how certain tastes or flavors just seem as though they were created with you in mind? That's how I feel about A Oaxacan The Clouds, which mixologist Julian Cox (Rivera, Las Perlas) created with Del Maguey Mezcal, roasted farm tomatoes, agave nectar, crispy sage, and Piment d’Espelette (aka, French chili pepper). (Editor's note: Dave Fernie created the cocktail, not Julian Cox).

Playa's "A Oaxacan The Clouds" 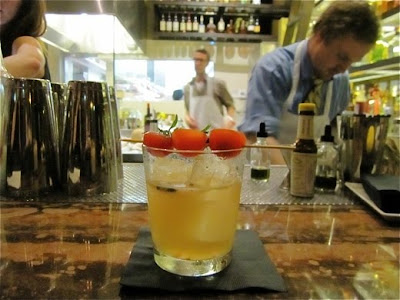 As I've gotten older, I realized that I enjoy two drinks more than any other: champagne and mezcal (separately). Readers of the blog who came along on my taco + mezcal tour of Zihuatanejo, Mexico in October won't be surprised at the latter choice. But here's the deal; in my opinion, champagne isn't the best drink of choice on chilly, rainy days like today. On the contrary, days like today require a drink with spice, smoke and savory undertones. Three tastes that A Oaxacan The Clouds delivers on in spades. Upon your first sip -- scratch that, before your first sip -- you're hit with the subtle smokey aroma from the Mezcal. For Mezcal newbies, the drink is a cousin to tequila. However, rather than being made from agave, it's made from the maguey plant, a form of agave which is oven-cooked to give it a distinct smoky flavor. 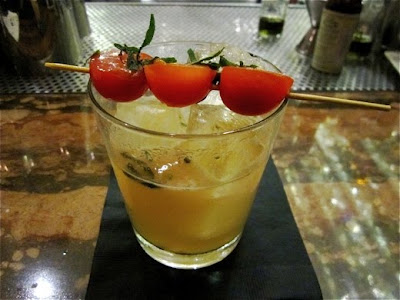 That first sip then brings the smoky aroma to life, then gives way to a taste of savory sweetness (yes, there is such a thing) of the oven-roasted tomatoes. The sweetness is compounded by a touch of agave nectar, but plays a second, even third fiddle to warming effect of the mezcal and tomatoes. Each sip burns ever-so-slightly as it makes its way through your mouth and down your throat. The warmth is magnified by the spice in the piment d'espelette, a chili pepper grown in France that lends a bite of heat to the Mezcal's smoke. Don't worry; physically it's a good hurt, but emotionally it's complicated. Each sip leaves you wanting more but leads you closer to an empty glass. Finally, take a few bites from the juicy cherry tomato and crispy sage skewer and you've just added another level of earthiness, not to mention a mini palate cleanser. Then lucky for you, you get to pick it up and sip again (and again).
Make no mistake, A Oaxacan The Clouds is meant to sipped. Savored, even. If only I had one at my desk right now...
Crumbs left by Christie Bishop at 9:00 AM