L.A. is HOT. The kind of hot that, as kids, meant slip 'n slides made their appearances on front lawns, hoses became cooling devices and frozen popsicles became regular afternoon treats. While a popsicle sure sounded nice earlier today, it didn't make the cut as a fulfilling, hot weather lunch. In this heat, there are few things you want to eat: I crave foods that are light yet filling, cool yet crisp, and healthy but full of flavor. So as we were out and about between errands, I'm so glad we stumbled upon the Cabbage Patch, a (somewhat) new sandwich, salad joint on Beverly Boulevard that focuses on sustainable, organic fare. And it just happened to have cool-down lunch options practically made for a hot-weather snap. 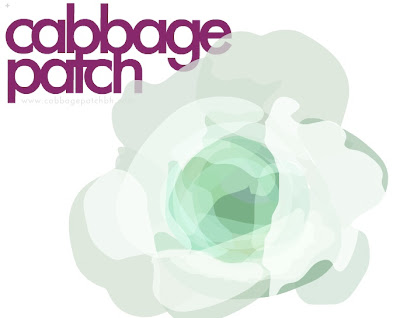 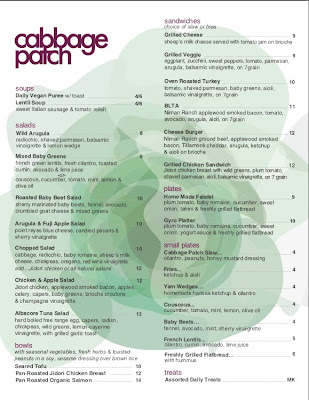 I ordered a chopped salad filled with cabbage, radicchio, baby romaine, sheep's milk cheese, chickpeas, oregano and red wine vinaigrette. I added chunks of Jidori chicken (cage-free and raised locally in Southern California; a really big deal to me since I scared myself stupid by watched Food, Inc.). If you're not a chicken fan, there's also an option to add chopped salami. I really enjoyed the salad; it met all my criteria for lunch on a super hot day but truth be told, it could have used just a bit more dressing. To be clear, there are salad dressing lovers out there: the people who drown their salads with various oils, vinegars and dairy-based toppings. I'm not one of the those people. I use restraint with my dressing, but I will admit that this one was a bit under-dressed. No harm, no foul; just ask for some extra dressing and you're set to go. 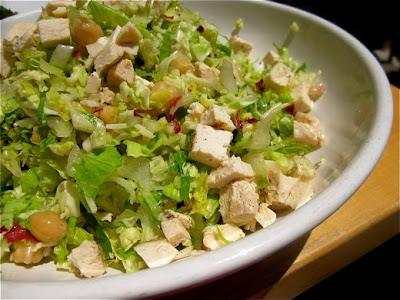 Bryan went for an oven-roasted turkey sandwich. His favorite turkey sandwich IN.THE.WORLD. comes from a tiny joint in San Carlos called Gracie's Delectables. Gracie, the namesake, roasts whole turkeys first thing in the morning, cuts the turkey breast right off the carcass before your eyes and adds it to your sandwich immediately after you order it. It's the epitome of made-to-order freshness, especially when it's served on homemade oatmeal bread. But I digress. When Bryan tasted the sliced turkey in the Cabbage Patch sandwich and remarked that the meat was similar to Gracie's, I knew we had a hit. He also liked that it was served simply with tomato, shaved parmesan, baby greens, aioli, and balsamic vinaigrette on seven grain bread. The sandwich comes with fries (no way on this hot day) or Cabbage Patch's signature slaw. You can see which one he chose. I liked the slaw so much that I've included the recipe below, courtesy of an interview the chef did with LA Weekly.
Oven-Roasted Turkey Sandwich on Seven Grain Bread 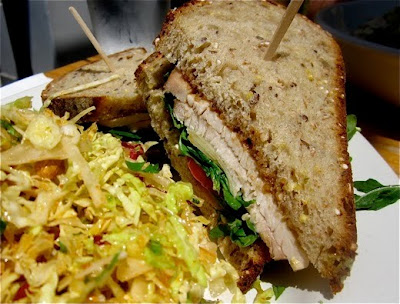 Since it was our first time at Cabbage Patch, we ordered a small side of French lentils, served cold with cilantro, cumin, avocado and lime juice. The avocado added a great, creamy touch to the cool lentils, the cumin wasn't overpowering and the tang from the lime juice was a great touch. Part of me wanted to dump it into my salad; which I think I might do next time!
French Lentils | cumin, cilantro, avocado & lime juice 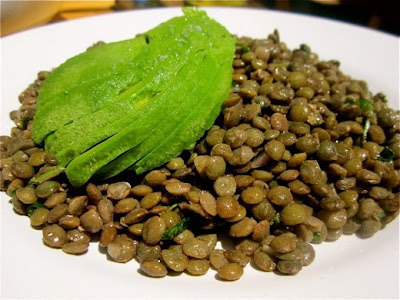 On to the slaw. If you're a slaw fan like me, check out Cabbage Patch's recipe below. It's not creamy or too sweet like some slaws can be; it's got a bit of heat from cayenne pepper, crunch from toasted peanuts, lots of texture from sliced cabbage, jicama and radicchio and a flavorful dressing filled with champagne vinegar, honey, dijon mustard and spices. Since Summer is still in full-swing, it would be a perfect accompaniment for Labor Day BBQs. Enjoy!
Cabbage Patch Slaw Recipe
Note: The dressing should be made first and the salad dressed to taste; any remaining dressing can be saved for another use.  Makes: About 12 side salad portions
Cabbage Patch Signature Slaw 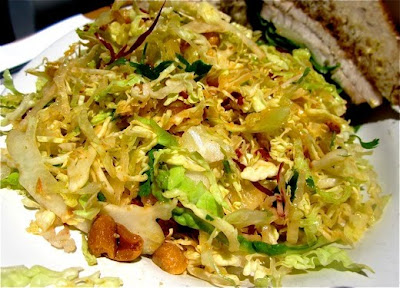 Dressing Ingredients
Make the dressing: In a blender mix together the herbs, spices, honey, mustard, peanuts, and vinegar. Drizzle in the oils slowly, until emulsified. Season with salt and pepper as needed.
Slaw Ingredients
Make the slaw: In a large bowl, mix together the cabbage, radicchio, jicama and cilantro. Toss with dressing (to taste), season with salt and pepper (also to taste) and garnish with toasted peanuts. Divide between bowls and serve immediately.
Crumbs left by Christie Bishop at 10:08 AM